Tinted glasses to be illegal from May 4

Cars with company fitted tints will be an exception 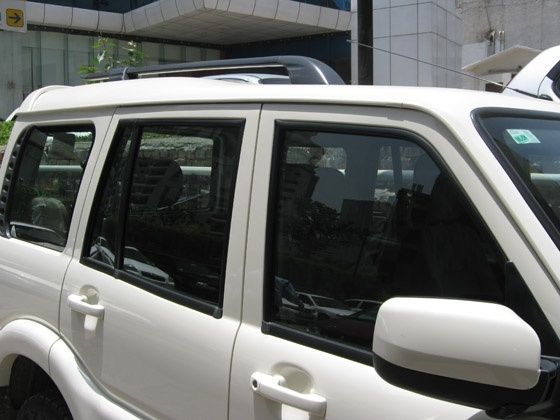 The apex court's judgment said, "We prohibit the use of black films of any visual light transmission (VLT) percentage or any other material upon the safety glasses, windscreens (front and rear) and side glasses of all vehicles throughout the country." Traffic police will launch a massive drive to remove films Friday onwards, when the SC order comes into effect. If the film is not removed, the car may even be impounded.

The Supreme Court judgment said, "The directions contained in this judgment shall become operative and enforceable with effect from 4th May, 2012." The court has ruled that traffic police "shall also remove the black films from the offending vehicles." "In accordance to the apex court's order, we will be prosecuting any vehicle found with tinted film on the window. Irrespective of the percentage of the tinted film, challans will be issued and the tinted film removed immediately. If the vehicle owner resists the removal of tinted film, the car will be immediately impounded," said joint commissioner of police (traffic) Satyendra Garg.

The drive will begin on Friday morning and 50 teams of traffic police officers will be posted across the city to rein in vehicles. "The earlier practice of allowing vehicle owners to report to the area traffic officer within 72 hours of the offence after removing the tinted film will be discontinued. Now, there will be no such leeway," added Garg.

Till April 15 this year, 9,279 people have been prosecuted for the offence. Last year, as many as 45,649 vehicles were booked for tinted glasses. "Significantly, majority of these were repeat offenders, showing that despite being caught, Delhiites are mostly unmindful of the rules," said a senior traffic officer.

This year, in a drive started on March 27, wherein around 2,064 offenders were booked till April 26. Of them, 999 vehicle owners were made to remove the tinted screen on the spot. "Usually, since the fine is just a meagre Rs 100, which is nothing compared to the money spent on films (ranging from Rs 700 to Rs 14,000 for those that protect from UV rays), it is not enough of a deterrent to defaulters who continue to travel in the vehicles. We hope stricter action will make the defaulters mindful of the rules," said Garg.

Tinted glass in vehicles is seen as conducive to criminal activities, especially on women's security. Whether it was the murder case of IT executive Jigeesha or the Dhaula Kuan and Mayapuri rape incidents, cars with tinted glass have been brazenly used.