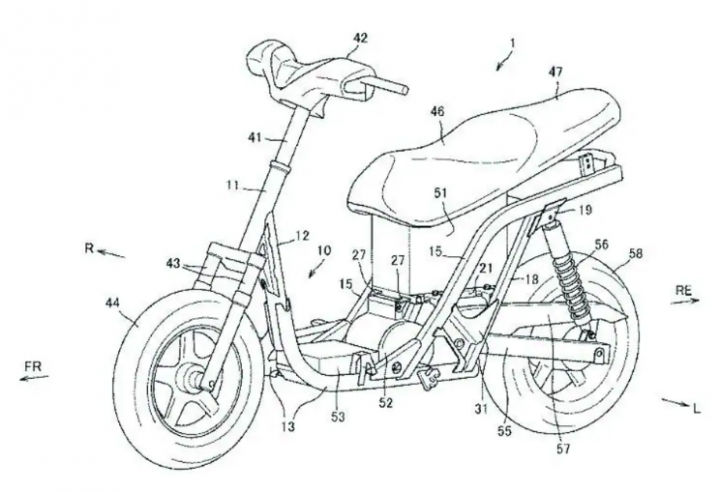 Suzuki Motorcycles India had revealed its plans of entering the electric two-wheeler space in June 2019. The brand then announced that it would begin testing an electric scooter in India by the end of 2020.  That was last November, post which we hadn’t heard of any new developments. Now, a couple of leaked patent images reveal Suzuki has been toiling away behind closed doors to bring this scooter closer to reality. The images showcase a relatively simple-looking scooter with a packaging layout comparable to conventional scooters.

Suzuki’s design brief must have been pretty straightforward: design a low-cost electric scooter that can be manufactured in India and exported to international markets. The patent images show just how similar the underbone chassis is to a conventional ICE-powered scooter, though it’s been reinforced to ensure structural integrity. The e-scooter will also use a proper swingarm with twin shocks like most electric two-wheelers and a telescopic fork.

Suzuki has managed to centralise the mass of the scooter by positioning the battery pack under the seat with the micro-controllers and circuit boards seemingly placed within the floorboard. Suzuki may even offer swappable solutions to make life simpler. But that’s just a hunch based on the placement of the batteries.

This setup may aid the scooter’s handling, but it also eats into the underseat storage space which could have been utilised better. The electric motor that’s placed right under the battery pack may use a belt drive (used on most e-scooters) to power the rear wheel.

The sheer simplicity of the scooter points in the direction of a city commuter that’s likely to be priced competitively. Though range might be limited, the positioning of the batteries could offer the ability to swap them out, thereby eliminating range anxiety.

All said and done, the current lockdown may postpone Suzuki’s electric plans. This means we would get to see the scooter by late-2021 or even at Auto Expo 2022 for that matter.