All of a sudden, the Hyundai Tucson is starting to look like a good value next to the Tiguan. Let's see how it holds up against the fresh competition. 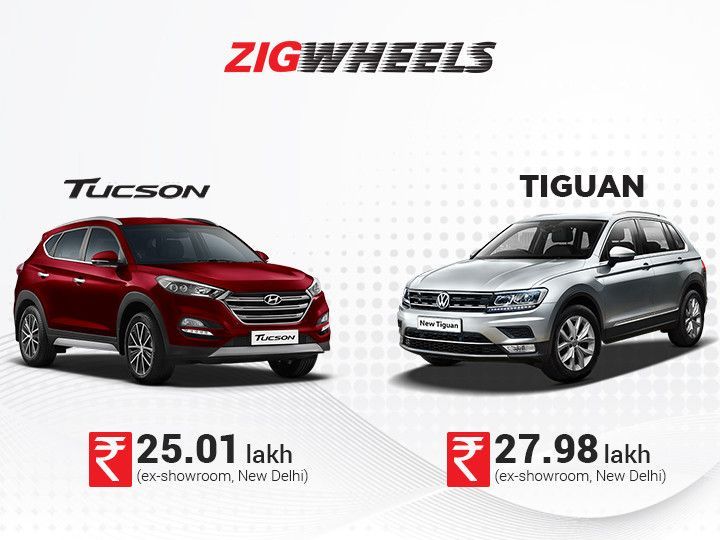 The latest crossover from Volkswagen is well loaded, and the carmaker is charging the buyers for it with a steep price tag. Volkswagen would like to call the German alternatives as its competitors but it's not considered a luxury carmaker yet. So, we're going to pit the Volkswagen Tiguan Comfortline against the Tucson GLS diesel automatic. Despite picking the top end Hyundai Tucson and the lowest trim of the Tiguan, the price gap stands at Rs 3 lakh. Forgive us. That's as close as we could get on the money scale. Let's get started on the mechanical side and see how they stack up.

The Tucson beats the Tiguan's bulbous body parts with more power and more torque. The Tiguan opts for a 7-speed dual clutch while the Tucson has the infinitely reliable 6-speed torque converter. In addition to a quick-shifting gearbox, the Tiguan also has all-wheel drive, which should keep it light on its feet. The Tucson suffers from the transmission's inherent nature to sap power, and then there's only front-wheel drive on offer. So grip levels won't be as strong as the Tiguan's.

In any case, these crossovers are going to spend their time in the city. 149mm of ground clearance on paper could be a heart breaker and a deal breaker for some even if it could clear our speed breakers without a problem.

The boot space and fuel tank are again better with the Tiguan but the Comfortline trim sports 17-inch wheels compared to bigger wheels of the Tucson.

Comparing the base variant of one car with the top trim of the other is supposed to show big differences between their feature list, but the Tiguan holds its own by offering several features as standard. The common list of equipment includes:

The standout features exclusively available with the Tucson include:

All of these are also available on the Tiguan Highline, but the Comfortline also has these following exclusive articles:

Clearly, the Tucson is more powerful, better equipped, and costs a lot less. All-wheel drive is exclusive to the Tiguan but whether it's worth the additional Rs 3 lakh or not is debatable as the crossover's advertised ground clearance raises questions about its off-road abilities.

The Tucson comes off as a clear winner in comparison and a complete value-for-money alternative to the Tiguan.