The 100,000th car was rolled out of Volkswagen Group's Chakan facility in Pune 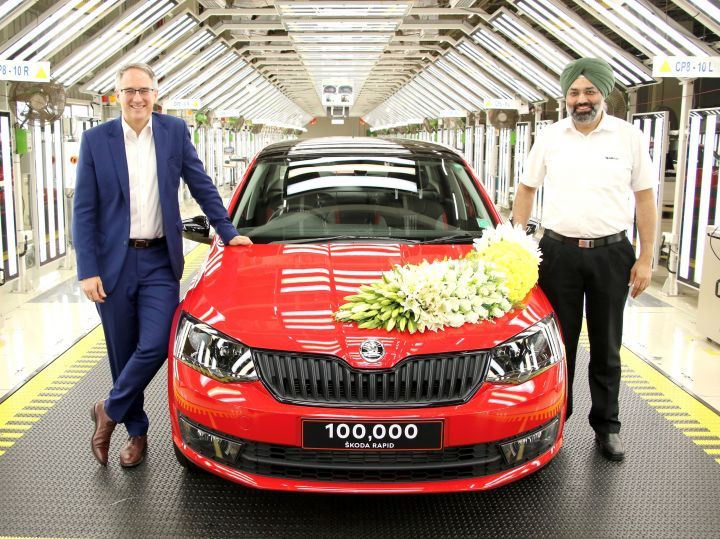 Today, a Skoda Rapid rolled out from VW's Chakan (Pune, Maharashtra) manufacturing facility marked the production of 1,00,000 Rapids in India. The variant rolled out was a flash red Monte Carlo variant, prices for which start from Rs 11.39 lakh (ex-showroom Delhi). The Rapid nameplate was introduced in India back in November 2011, but has been a part of the Skoda’s history since 1935. The current facelift was introduced in 2016 and continues to be the highest selling model for the company in India.

The Monte Carlo moniker, however, was first introduced back in 1937 with the Popular when it took second place in the Rallye Monte Carlo.

Prices for the Skoda Rapid start from Rs 7.99 lakh and go up to Rs 13.99 lakh (ex-showroom Delhi). It rivals the likes of the Maruti Ciaz, Honda City, Hyundai Verna and its rebadged cousin - the Volkswagen Vento. Here’s the car maker’s official press release for more details:

ŠKODA AUTO India celebrates the rollout of the 100,000th RAPID

The marque was previously used in the 1930s for the RAPID (Type 901) and in the 1980s for the rear engine RAPID Coupé. In November 2011, ŠKODA AUTO resurrected the RAPID nameplate for the subcontinent. The compact sedan was developed exclusively for the local market by ŠKODA AUTO India, a subsidiary of the Czech automobile manufacturer ŠKODA AUTO. The RAPID proved its mettle as a perfect blend of the brand’s timeless design ideals, unbending performance, superior build quality, enhanced safety and security, and European craftsmanship, all at a competitive price point. The RAPID marked ŠKODA AUTO’s foray into the popular C segment and garnered much appreciation from brand loyalists and auto enthusiasts from across the nation.

The new ŠKODA RAPID, introduced in late 2016, shares the emotive crystalline design cues with the rest of the ŠKODA AUTO product portfolio, among other elements: a plethora of safety and security modules, wealth of standard features and numerous 'Simply Clever' solutions. The vehicle is ŠKODA AUTO's best seller in the Indian market setting benchmarks for functionality, practicality, and spaciousness in its segment. A tribute to the success of the Czech moniker at the legendary ‘Queen of Rallies’, the premium ŠKODA RAPID Monte Carlo combines luxury and glamour with pulse racing sports styling.

Mr. Zac Hollis, Director – Sales, Service and Marketing, ŠKODA AUTO India said "The RAPID continues to offer a compelling combination of the brand’s emotive design, exquisite interiors, leading safety as well as intelligent connectivity features. The production milestone is a testament to its strong equity among discerning customers in a dynamically evolving automotive market like India. With this accomplishment, we commit a stronger product portfolio and enhanced ownership experience - ascertaining, PEACE OF MIND comes standard with a ŠKODA."