What has 10 years done to some of the most popular cars on sale in India in 2009?

The #10YearChallenge may be seen as data gathering mechanism (to enhance our AI overlords) by some, another opportunity to indulge in a bit of self-appreciation publicly or just plain narcissism. But it sure is fun. Here’s what’s happened to some of the most popular cars sold in India in the past 10 years. 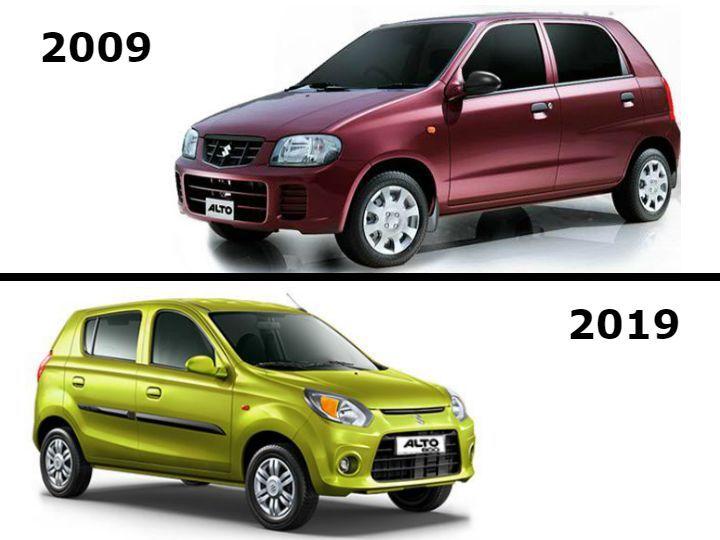 Why did Maruti adopt a tall-boy design for the Alto? Well, it is a different car altogether, even though it might share the name with a popular old-school hatchback. Looks may be polarising, but the Alto remains a popular hatchback in the country thanks to the power of word-of-mouth advertising and the general trust in the company.

Also Read: More than 3.5 million Altos have been sold!

Some made a comeback

After a 16-year run, the Santro was discontinued in 2015. But the popularity of the brand and the need for a new compact hatchback in its lineup made Hyundai bring back the nameplate on a new-looking, mechanically-reworked car.

Also Read: We have extensively tested the new Santro (including the AMT variant) and here’s what we think.

Some tried to become cooler

The Maruti Suzuki WagonR is going to get a generational change soon, and it's trying to break the mould of being a sensible, no-nonsense commuter by adding a dose of style. Will it work?

Also Read: Here’s what we know about the upcoming WagonR.

Some worked on their potential

The Hyundai i20 was popular for being spacious, feature-laden and affordable. The Elite i20 took all that to the next level and added better handling and premiumness. If there is one car which changed the way Indians perceive the Korean company, it is the Hyundai i20.

Some improved their inner selves

Look at the Mahindra Scorpio and you will see an SUV which seems to have gone to the gym - but drive it and you know that things have changed. On-road mannerisms have improved tremendously, while still retaining the toughness and off-road capabilities of the older car.

The Fortuner is still a huge SUV, no doubt. But just look at the before and after photos, the new one seems to have lost some pounds. The added luxuriousness to the exterior and interior makes the Fortuner even more popular.

The new Ford Endeavour really took the full-sized non-luxury SUV segment by storm when launched back in 2016. While the old Endeavour was literally a pick-up truck transformed into a 7-seater SUV, the new one was designed from the start to be an SUV. This meant usable space, better on-road dynamics and vastly improved creature comforts.

Some want to get back to being popular

The Honda City has not had the smoothest of sailing in its segment, in spite of holding a sweet spot in the hearts and minds of many Indians. The Maruti Suzuki Ciaz, Hyundai Verna and the Toyota Yaris (to an extent) have made the segment highly competitive. This is on top of the fact that people like SUVs more than sedans today. But Honda is not giving up, the City remains one of the sportiest sedans to drive in the segment and is fairly well-loaded.

Some are still ridiculously popular

It may look like the new Innova Crysta is a tad overpriced today. When the facelift was launched back in 2009, the Innova cost between Rs 7.66 lakh to Rs 11.06 lakh, taking into account inflation it would be priced at Rs 15.73 lakh - Rs 22.72 lakh today. So, it has always been priced at a premium. Why? Because it was popular. Some of those reasons to be this popular may have been sound, but the Innova is the perfect example of how to milk popularity.

Some don’t seem to change at all