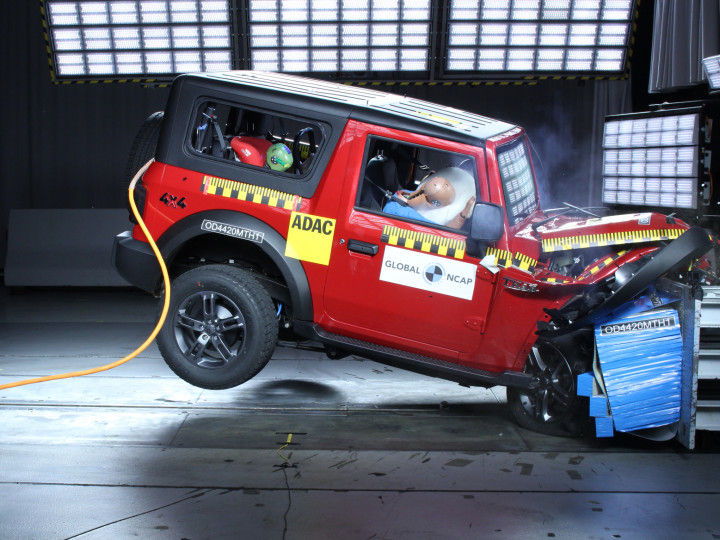 The second-gen Mahindra Thar has secured an impressive overall score of four out of five stars in the Global NCAP crash test. This is in stark contrast to its predecessor which didn’t really have any safety features to speak of. We are happy to see Mahindra focusing more on the safety of its new vehicles.

The new Thar scored four out of five stars in both Adult Occupant Protection (AOP) and Child Occupant Protection (COP). In fact, it has the highest COP score of all made-in-India cars tested by Global NCAP under its #SaferCarsForIndia campaign. It was crash tested at 64kmph as per Global NCAP standards. The body shell integrity was reported stable with the capability of taking further beatings. However, the footwell area was rated unstable.

The Thar’s COP score is 41.11 out of 49. It was able to prevent excess head movement for the child dummy fitted onto a forward-facing rear seat. It also offered full protection to the 18-month-old dummy fitted onto a rear-facing child seat. Meanwhile, the report appreciated the presence of ISOFIX anchor points and three-point seat belts for all occupants on the variants with forward facing rear seats.

The Thar’s four-star rating in the Global NCAP safety test makes it a formidable offering. It comes with various safety features including dual airbags, ABS with EBD, a roll cage, rear parking sensors, and electronic stability control. The Thar tested by Global NCAP was the LX hard top variant.

Commenting on the scores, the Chief of Global Product Development, Automotive Division, Mahindra and Mahindra, Velusamy R, said, “This is a proud moment for Mahindra as the 4-star rating for the all-new Thar reiterates our unstinted commitment towards safety. It has achieved a robust GNCAP 4-star rating, which is a first in its segment with highest points in child safety amongst all cars tested by Global NCAP so far.”

The Thar has been one of Mahindra’s most successful SUVs, racking up more than 20,000 bookings since its launch in November. The lifestyle off-roader is priced between Rs 9.80 lakh and Rs 13.75 lakh (ex-showroom). It currently has a waiting period of up to seven months.