The MG Hector Has Already Racked Up 50,000 Bookings

The landmark comes nearly eight months after its launch 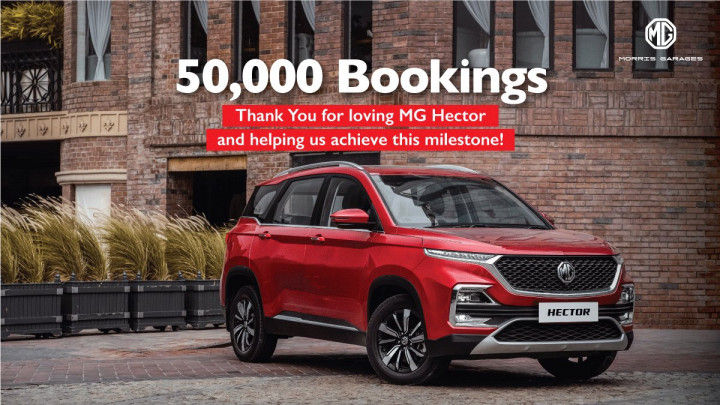 MG Motor India has announced that its premier product in India, the Hector mid-size SUV, has accumulated 50,000 bookings since its launch on June 27. This landmark comes despite frequent periods when MG had to pause bookings due to production constraints. The Hector competes with the Kia Seltos, Mahindra XUV500, Tata Harrier, and will rival the upcoming Hyundai Creta and Haval SUVs. It is priced between Rs 12.73 lakh and Rs 17.43 lakh (ex-showroom).

The Hector’s petrol engine was updated to BS6 in January, ahead of the March 31 deadline. Since the competition offers BS6 diesel engines, the Hector’s oil burner is likely to get an update too. A 6-seater variant was showcased at Auto Expo 2020 and could arrive by the festive season.

The Hector and Seltos have a lot in common: both are mid-size SUVs and both were the debut models for their respective manufacturers.

Compared with the Hector, the Kia Seltos achieved its 50,000 bookings landmark barely three months after its launch. Nonetheless, the Hector’s feat is still commendable because, like we mentioned, MG had to pause bookings at least two times. Even more interestingly, the Hector racked up its first 28,000 bookings in just around three weeks since launch.

This year’s Auto Expo showcased more competition for the Hector. SUVs from Haval’s stable, the upcoming Creta, and Mahindra’s new XUV500 are geared up to give this MG a run for its money. Many of the features that pleasantly surprised us in the Hector could soon show up its rivals, making them commonplace and the norm. As the sands shift, will the Hector be able to maintain its poise?