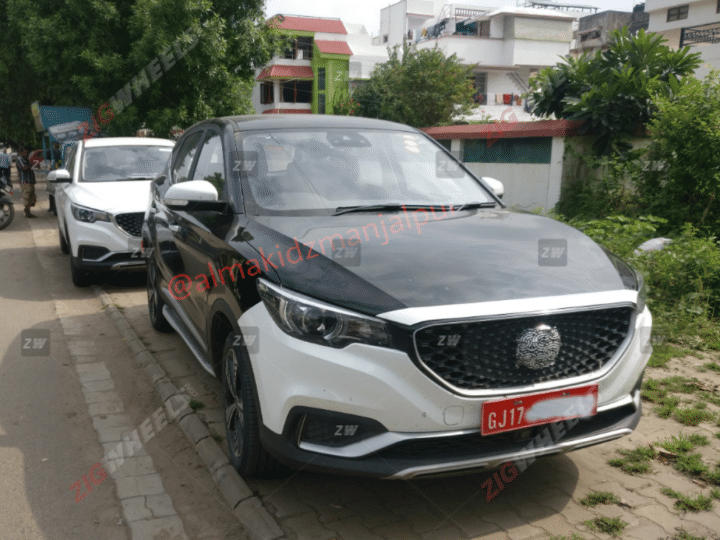 After successfully launching the Hector, MG Motor India is gearing up to launch its second car, the eZS. The all-electric SUV has been launched in international markets and is slated for an official reveal in India by December 2019. Now though, the eZS has been spotted undergoing testing in India.

Visually, the India-spec model looks similar to the international-spec eZS. The large MG grille is laden with chrome inserts and is flanked by projector headlamps that are likely to be LED units. Dual-tone alloy wheels have been carried over from the international-spec eZS while a sharp crease runs through the profile. The rear-end of the India-spec model hasn’t been spied yet. But going by the similarities, we expect it to be the same as the SUV sold overseas.

Inside, the eZS comes with an all-black dashboard, a sleek three-spoke steering wheel and hooded dials. Dominating the central console is an 8-inch infotainment system that’s smaller than the Hector. The eZS comes with a round gear lever and plenty of silver inserts all around for added bling.

Under the hood, the international-spec MG eZS’ electric motor develops 150PS and 350Nm. It draws power from a 45.6kWh battery pack that’s capable of taking you 428km (NEDC claimed) on a single charge. The battery pack also supports fast charging and is capable of juicing it up from 0-80 percent in 30 minutes. We expect the India-spec eZS to have the same specifications.

MG Motor India wants to ensure that it has all the bases covered before launching the eZS in India. It joined hands with Delta Electronics for setting up AC chargers at homes and office spaces. The carmaker is also educating customers to relieve them of range anxiety and the various advantages of EVs over conventional fossil fuel-powered cars. When the eZS is launched in India, expect it to feature a price tag of Rs 23 lakh to Rs 25 lakh (ex-showroom). The eZS will compete with the Hyundai Kona Electric on our shores.