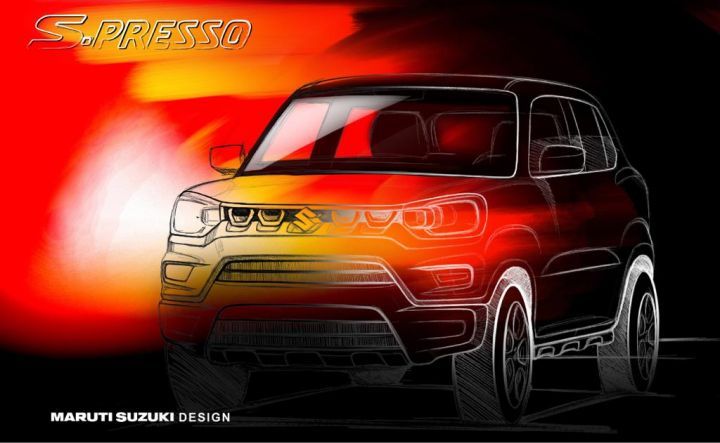 Maruti Suzuki’s first mini cross-hatchback, the S-Presso, is slated to launch on September 30. Based on the Future-S concept that was displayed at the 2018 Auto Expo, the S-Presso will have certain SUV styling cues to add to its appeal. And just a couple of weeks ahead of its launch, the carmaker has officially teased the production-spec exterior design of the S-Presso via a sketch and a short video.

Visually, the S-Presso comes with an upright nose that houses the sleek grille and square headlamps along with a tough-looking bumper. The bumper has various sharp lines, creases and a skid plate that add to the oomph factor. In profile, thanks to the sharply raked A-pillar, you’ll notice that the S-Presso has an upright stance. The sketch also reveals that Maruti has tossed in body cladding to add to the oomph factor. Based on previous spy shots, we can tell you that the S-Presso will come with an upright rear that echoes the front design as well.

Overall, Maruti has done a good job making the S-Presso look like a mini SUV. But thanks to a leaked document that reveals the S-Presso’s dimensions, we know that it is a tad smaller than the Renault Kwid.

The interior design of the production-spec S-Presso is yet to be revealed. Just like the Future-S concept, the production-spec car is expected to have a round central console with a centrally mounted speedometer. Expected features in the S-Presso include Maruti’s SmartPlay Studio touchscreen infotainment system with Android Auto and Apple CarPlay as well as a digital instrument display, power windows, keyless entry with push-button start and projector headlamps.

Under the hood the S-Presso will be powered by a BS6-compliant version of Maruti’s 1.0-litre K10B petrol engine developing 68PS and 90Nm. We expect Maruti to offer both 5-speed manual and AMT options in the S-Presso. The carmaker could offer an eco-friendly CNG variant at a later stage.

Prices for the S-Presso are expected to start from Rs 4 lakh (ex-showroom pan India). When launched the S-Presso will rival the Datsun redi-GO and the Renault Kwid. It must be mentioned that Renault is working on a facelift for the Kwid that’s slated to launch by the end of September. So stay tuned for a comparison report between these entry-level hatchbacks.