Showcased in Korea, the near-production version takes most of its design cues from the SP Concept that was revealed at the 2018 Auto Expo 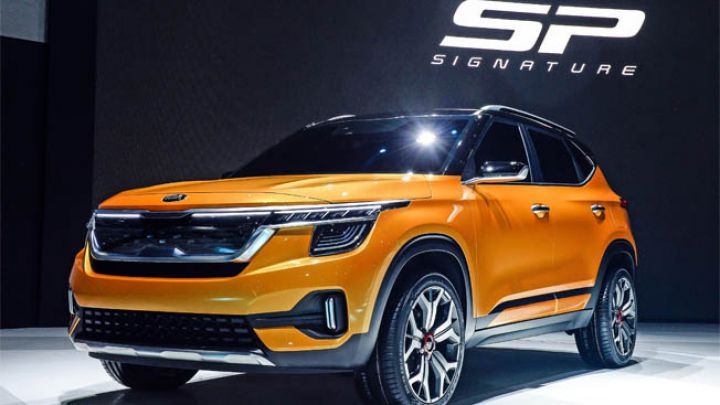 Korean carmaker Kia has showcased a near-production version of its highly anticipated first SUV for India, codenamed the SP2i, at the Seoul Motor Show. Labelled as the SP Signature concept, the compact SUV retains most of the design cues seen on the SP Concept that was showcased at the 2018 Auto Expo.

In addition to what we have already seen on the concept in India, the SUV now gets production-ready door handles, new bumpers and sleeker LED headlamps with integrated DRLs.

Showcased in a similar shade of orange as the SP Concept, the new SUV comes with a blacked out roof along with roof rails and also gets black OVRM covers. It's also seen wearing a new set of alloy wheels. While these look larger, the production-spec model spotted in India with camouflage rocked another set of 17-inchers. Among other changes are a more prominent Tiger Nose grille with a generous amount of chrome and a more upright tailgate.

While the Korean carmaker is yet to reveal the interiors of the evolved SP Signature, expect it to feature a more production-ready cabin than the one seen on the SP concept earlier. The concept showcased in India had a twin screen setup for infotainment and instrumentation, which hogged most of the space in the dash. It also featured dual-tone interiors with ambient lighting and a rather futuristic two-spoke steering wheel. While most of these features might not make the cut on the production-spec model, Kia is expected to give the SUV’s interiors a premium treatment.

Expected to be launched in India by September this year, the SP Signature will be christened as either Tusker or the Trailster here (the two names selected by Kia as part of a competition). Likely to be priced in the range of Rs 10 lakh to Rs 16 lakh (ex-showroom), the compact SUV will rival the Hyundai Creta, Maruti S-Cross, Renault Duster and the recently launched Nissan Kicks.