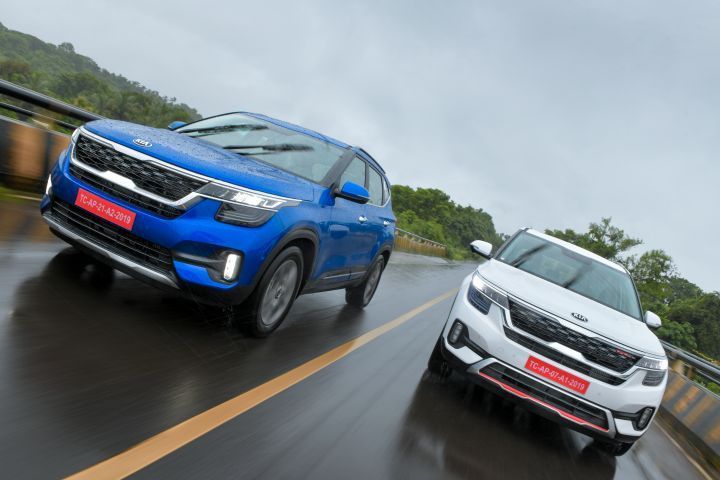 Update: Kia has officially launched the Seltos in India with prices starting at Rs 9.69 lakh

The Kia Seltos is set to shake things up in the compact SUV space once launched on August 22. The SUV comes with aggressive styling, impressive features and a plethora of engine-transmission options. We already know that the Seltos will come in two trims - GT Line and HT Line. But what differentiates the two trims? Let’s find out:

At the front, both trims sport Kia’s signature ‘Tiger Nose’ grille and gets futuristic looking LED headlamps and vertical LED fog lamps below. A chrome wraparound is also present on the headlight. The HT Line comes with a simpler single-tone gunmetal alloy wheels.

The GT Line on the other hand adds to its sporty nature with an additional chrome-red insert on the air dam as well as better looking dual-tone machine-finished 16- or 17-inch alloy wheels.

The similarities between the two trims continue with flared wheel arches and black cladding running all around the bottom of the car. There’s also a neat chrome insert that extends from the windowsill to the rear windshield raking up sharply under the rear quarter panel. At the rear, the Seltos gets a neat chrome strip on the boot lid that extends from one tail light to the other. The rear bumper gets a black cladding as well, with faux exhausts and a skid plate.

The GT Line does differ with a red strip on the lower half of the doors instead of the chrome line on the HT Line. At the rear, the GT Line features an additional red strip above the skid plate. The GT Line also sports its trim badge on the boot lid.

On the inside, both trims feature all the bells and whistles that include the 10.25-inch touchscreen infotainment system 7-inch instrument cluster, Bose sound system, ‘smart’ 8.0-inch head-up display, UVO Connect features, and more. Safety features on offer include six airbags, tyre pressure monitor, ABS, and vehicle stability management. HT Line sports a classy approach with light beige interior upholstery with white stitching near the gear lever and the front armrest.

The GT Line, on the other hand, looks sportier with contrasting red stitching on the steering, gear lever, seats and armrest. It also gets different seat upholstery with GT Line badges. If you look closely, the GT Line also features aluminum pedals which further adds to its sporty character.

The GT Line gets the most powerful engine of the lot - the 1.4-litre Turbo GDI petrol motor that delivers 140PS of power and 242Nm of torque. The 1.4-litre motor is mated to a 6-speed MT and a 7-speed DCT.

The Kia Seltos will offer a total of eight variants split among the HT Line and GT Line trims. The HT has a total of five variants - HT E, HT K, HT K+ HT X and HT X+.

While the GT Line may have fewer variants, it has more features when compared to the HT Line.  The variants are named GT K, GT X and GTX+.