Jaguar enters the SUV ring for the first time ever, with the F-Pace. Yay or nay? 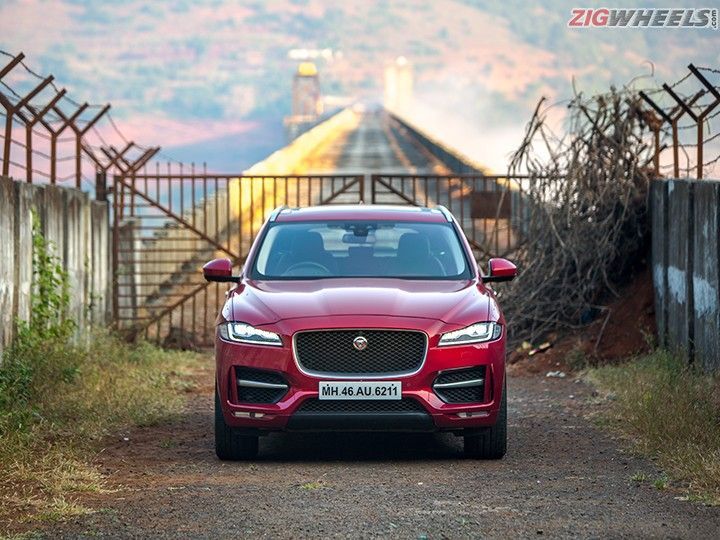 There are luxury car brands and then there’s Jaguar. The brand is known for a lot of things – exquisite designs, panache, dynamic abilities; and that’s besides the luxury and the heritage it enjoys. I was in fact so smitten by the XFR-S and the F-Type that I had withdrawal symptoms for days after driving. So, a luxury SUV from Jaguar sounded somewhat outlandish. I couldn’t quite believe it at first, but, isn’t the entire world swooning over the form of the automobile?

Jaguar had to make the global unveil special, so they got the famous Terry Grant do a 360 degree loop in the F-Pace. Heck, that’s a record in the Guinness Book even before being launched! Jaguar is known to pull off crazy stunts with its cars, but the 360 degree loop topped it all. Jaguar was keen on showcasing how well it has shoehorned its famed sportscar DNA into an SUV, and in that sense the job had been done. Drive it we had to, to find out how good it is. So what we have here is the F-Pace R-Sport, powered by a 3.0-litre V6 diesel engine. Diesel? Will it be fun to drive you ask. How does 300PS and 700Nm sound for an answer?

Before we get to that, I have to delve into the fixating design. Typically Jaguar, is what I’ll say. The F-Pace draws inspiration from the new XF up front, while the tail lights clearly remind of the F-Type. In the red colour our test car wore, it looked fantastic, captivating and all that. But what caught my attention was its menacing look when I parked the Jag at home in the night, and it stood shrouded in the darkness, with just the ‘J-Blade’ DRLs glowing. For other times, it’s the muscular design and classic SUV silhouette that transfix. Look closely and you’ll also admire the intricately designed all-LED headlamp too. The piece de resistance though is that taut rear end. Unmistakably Jaguar, and so attractive!

The cockpit is snug and sporty, and you know you are inside a Jag. Seating is tall, typical of an SUV, but there’s a go-fast feeling as soon as you get behind the wheel. Credit that to the black leather with red stitching on the dashboard and red-black seat leather, which along with the trademark Jaguar steering wheel and paddle shifters offer a sense of raciness. I particularly liked the long arc running from the left door to the right, across the dashboard, which looks unique. If the black gets too much, there’s a massive panoramic sunroof to offer an airy feel.

The 10.2-inch ‘Touch Pro’ infotainment display is a familiar sight with its crisp resolution and bright colours, and so are the theatrics, like the drive selector rotary knob that comes up and pulsating red backlight for the start/stop button. The music system deserves a mention, as the Meridian speakers with surround system offer a likeable quality, especially if you like some bass. An interesting design trait from Land Rover are the power window switches positioned on top of the door pad, though it takes some getting used to. Step into the rear and the abundance of space isn’t surprising, considering the overall length.

The rear bench is comfortable and plush, and can easily seat three abreast, but the middle occupant has to make do with the transmission tunnel and rear air-conditioning vents (with individual temperate control). The rear seatback is motorised which makes it that much more convenient to recline. I’m not sure how many owners will sit at the back though, as this is an SUV you’d drive rather than be driven in. The boot is massive, boasting a volume of 650 litres and can take in a lot of stuff. Importantly (and thankfully!) the F-Pace gets a space saver spare tyre and not run flats.

To the 3.0-litre V6 diesel mill under the hood then. As petrolheads we’ve come to appreciate diesel engines, that’s thanks to engines like the one here. 300PS is big, especially for an SUV. And 700Nm is gut wrenching, especially when offered from just 2000rpm. The numbers are class leading, which speaks a lot about performance. On start up the oil burner just about makes itself heard, but on the go there’s barely a trace of the engine being a diesel, even at high revs. The big cat is quick to lunge each time it gets a chance, and in fact the urgency with which power is sent to the wheels can get a bit overwhelming. We couldn’t test the F-Pace for performance numbers, but I have reason to believe the F-Pace will outgun quite a few luxury cars with its sprightliness.

Helping matters is the eight-speed ZF transmission that keeps you enthused with its deftness in swapping ratios. Switch to Dynamic mode and there isn’t a sea change but you get a tangible feel of the way responses change, and the F-Pace feels all the more car-like. Midrange thrust is particularly pleasing to an extent where you might almost forget this is an SUV weighing well over two tonnes, and the aggression continues till you shift cogs. Acceleration is nifty, and cruising at speeds barely legal is a cinch with the planted feel. So to say, the F-Pace is more than adept at fast-paced cruising on highways, whether you are behind the wheel or relaxing at the back. And that’s where the Jaguar DNA shines through.

Get off highways and the F-Pace doesn’t disappoint for an SUV but it doesn’t exactly delight either. It makes some of its weight and size felt, particularly the size, in traffic. What’s likeable is the ease with which you can drive it around town, but you have a sense of its dimensions at all times, as the F-Pace is over 4.7 metres in length and over two metres wide. The turning circle is pretty wide though the steering helps matters, be it turning around or negotiating through traffic. The steering impresses even further around corners with its weighted feel, but some more communication around chicanes would have been welcome. Also, if enter a corner too fast, you feel something amiss. More so since stability control cuts in a bit too aggressively.

The safety net from the electronics is apparent aided by massive grip from the 255-section, 19-inch tyres, and confidence levels that can be afforded when driving spiritedly are impressive. Of course, you could choose to switch ESP off, and the tail is willing to step out the way you expect a Jaguar’s to, but this is no F-Type, it is a really big SUV. Dynamic mode tightens responses and offers a crisper experience, with better everything – engine and gearbox response, suspension tautness and steering feel too. These work in giving the F-Pace a sense of alacrity and somewhat manage to mask the SUV’s weight. The Jaguar isn’t the chart topper in terms of being a performance SUV though, despite the engine’s strong performance goading you into the belief.

The F-Pace is open to off-roading with 213mm of ground clearance, but this is no Land Rover and you’re better off with some light off-roading rather than the tricky bits. The fact that R Sport does not get adaptive suspension despite being the second most expensive variant is a bit of a downer and only the First Edition version gets it. Not that the R Sport’s suspension doesn’t do its job. It doesn’t let you feel potholes or undulations, speed breakers even, smoothening them out well, but there is a sense of stiffness, which is the trade-off for the sporty handling.

I’ve got to admit, the F-Pace does feel special as Jaguar’s first SUV and tries to distinguish itself with its sportier, more car-like feel. There is an engaging feel, especially with the 3.0-litre diesel engine that does its bit in enthralling you with its performance. The ride and handling package tries its best to round things off too, but throw the F-Pace into the ring with say, a Porsche Macan, and the bout should be an interesting one. Of course, that’s the ‘performance’ SUV the F-Pace has its sights on.

If sportiness is what you prefer over luxury, the R Sport’s interiors and equipment list will impress, besides its likeable mix of performance, space and comfort. Pricing begins at 68.40 lakh rupees for the base ‘Pure’ variant powered by the 2.0-litre, 4-cylinder diesel motor. That’s rather impressive for the poise and presence the F-Pace commands. If you are looking to back that presence with performance, you need to look at the R Sport, priced at a significantly higher Rs 1.02 crore ex-showroom. And if that’s what you have in mind, we’d recommend the First Edition with adaptive suspension, priced at Rs 1.12 crore. Now to hope for Jaguar to launch the F-Pace S with the F-Type’s turbocharged 3.0-litre V6, 380PS petrol engine!