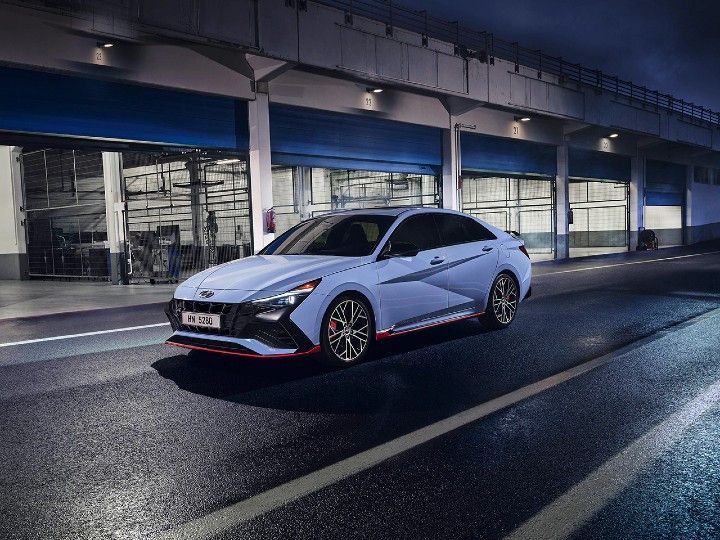 Hyundai has added yet another member to the performance-focused ‘N’ range with the unveiling of the new-gen Elantra N performance sedan. If you thought the Elantra N Line revealed in August last year was piping hot, well the Elantra N is hellfire dialed up to eleven!

Getting down to the business end of the Elantra N, the hot sedan is powered by a 2-litre turbocharged four-cylinder engine,making 280PS of grunt and 392Nm of twist. It can be paired with either a six-speed manual or a wet 8-speed DCT gearbox. 0-100kmph is achieved in just 5.3 seconds, with a top speed of 250kmph.

Power isn’t the only spicy bit on the Elantra N, as it gets a limited-slip differential, and an integrated drive axle inspired from WRC to aid its cornering prowess. Other enhancements include bigger brakes, stiffer suspension, as well as Michelin Pilot 4S rubber wrapped around N-specific 19-inch wheels to keep it glued to the corners. There’s also an N Grin Shift (NGS) feature that gives a temporary 10PS bump in power.

On the outside, the Elantra clearly signifies its N-branding, with a very meaty front end, red inserts all over, a rear wing and a prominent rear diffuser that houses bigger exhaust pipes.

Heading inside, you’re treated to sports seats with extra bolster support, N branding all over and additional info for the infotainment system such as a lap timer, g force figures, as well as engine oil and coolant temperatures.

Back home we have the previous iteration of the Elantra that retails from Rs 17.85 lakh (ex-showroom). So any chances of an N-branded Elantra are only possible once the next-gen model shows up. That being said, Hyundai is looking to bring the i20 N-Line to the country, as the hatchback has been spied testing quite a few times. The Elantra currently only has the Skoda Octavia as its rival in India.