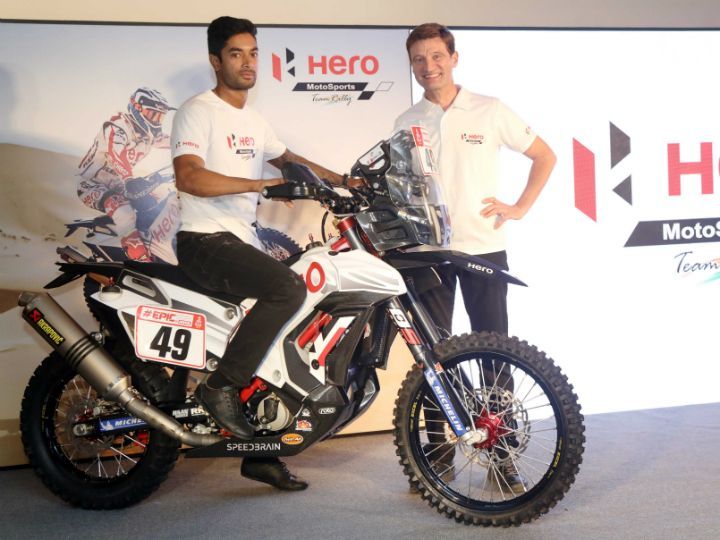 Hero MotoSports showcased its all-new Hero RR 450 rally bike for the first time in India today. Along with the reveal, the company also announced its team for the upcoming 2018 Dakar Rally.

For its second appearance in what is arguably the most gruelling off-road rally in the world, the company has recruited Oriol Mena Valdearcos in addition to CS Santosh and Joaquim Rodrigues. Both Oriol Mena and the Hero TT 450 rally bike would be making their debut at the Dakar this year. According to Hero, the new bike is an upgrade over last year's bike with an all-new design. The tank, body parts and the front section have been re-designed in order to improve mass centralisation, handling and riding ergonomics.

In its debut season last year, the Hero MotoSports Team Rally scored an impressive 12th place finish. This year, the team showed promising performance in the OiLibya Rally where Joaquim Rodrigues finished the rally in seventh while CS Santosh bagged the 15th position. Now, the team seems to be fully prepared for the upcoming challenge.

Speaking at the unveiling ceremony of the new bike, CS Santosh said, “I am satisfied with this year’s preparations, where I had the opportunity to work with industry professionals and experts, which brought in a better structure to the preparations. I am very happy with the new bike that we raced with at the OiLibiya Rally in October. The new bike is light, agile and makes going fast safe! This Dakar, I will aim to make each and everyday count! Ultimately it’s about enjoying the process and arriving at the finish line.”

The 2018 edition of Dakar will kick off on January 6, 2018, in Peru. Five hundred participants are expected to take part and each of them will cover a stretch of almost 9000km that will take them through Bolivia before concluding in Argentina. To follow the action as it happens, stay tuned to Zigwheels!