Is This The 2022 Royal Enfield Himalayan Or The Chimalayan?

LED headlight, a better console, and tubeless tyres are all we had hoped for in the 2021 Himalayan 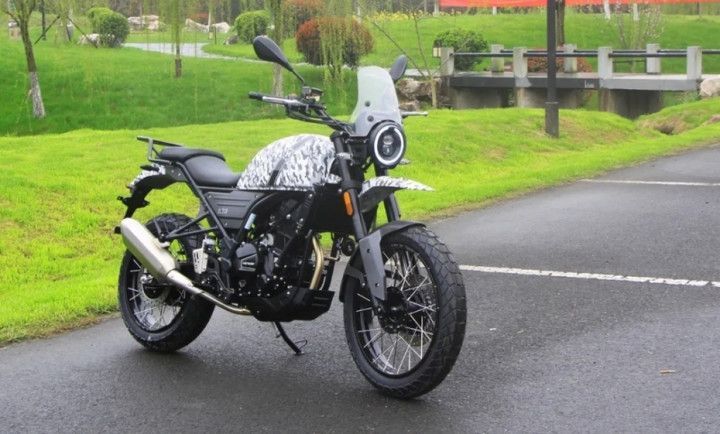 The 2021 Royal Enfield Himalayan came with what we could best label as ‘bug fixes’ and a Rs 10,000 price hike. Not really worth calling it a 2021 model, is it? Now, a new image of the ADV has surfaced on the web, with LED projector headlamp and DRL, USD forks, tubeless wire-spoke wheels, and even a TFT instrument cluster! Exciting times, right? We hate to burst your bubble, but what you are looking at is the Chinese brand Hanway’s new 250cc ADV, the G30. Or, as we would like to call it, the Hanway Chimalayan.

The G30 has been launched in two variants: Standard and G30-X. The latter comes with tubeless wire-spoked rims and a TFT instrument console. Prices for the bike start at CNY 17,280, which roughly translates to Rs 1.92 lakh (still cheaper than OG Himalayan!).

Unlike the Himalayan’s old-school, long-stroke motor on the original bike, the Chinese Himalayan is powered by a 249.2cc, liquid-cooled, single-cylinder engine producing 26.5PS at 9000rpm and 22Nm at 7500rpm. This engine is cradled in a duplex split double-cradle chassis, much like the Himalayan.

The frame is suspended on to a 35mm USD fork with 120mm stroke and a monoshock with 42mm stroke. However, unlike the Himalayan, there is no linkage for the monoshock on the G30. Braking duty is handled by a 280mm front disc and a 240mm rear disc, aided by dual-channel ABS. The Chinese Himalayan also gets a massive 19-litre fuel tank (the Himalayan gets a 14-litre unit).

While the Himalayan uses a 21/17-inch setup, the Hanway has opted for a 19/17-inch spoke arrangement (some originality there). Interestingly, you can also opt for tubeless wire-spoked rims, as we see on premium ADVs.

When it comes to features, Hanway has thrown everything at the G30. A twin-pod LCD console (a full TFT screen is also on offer), LED headlights with DRL, and a charging socket come as standard with this ADV.

We have seen Chinese brands mock Italian designs and German engineering with their blatant rip-offs, but to have them ape an Indian bike isn’t very common. That said, maybe Royal Enfield should take note and bring a ‘real’ update with such features to the Himalayan next year?