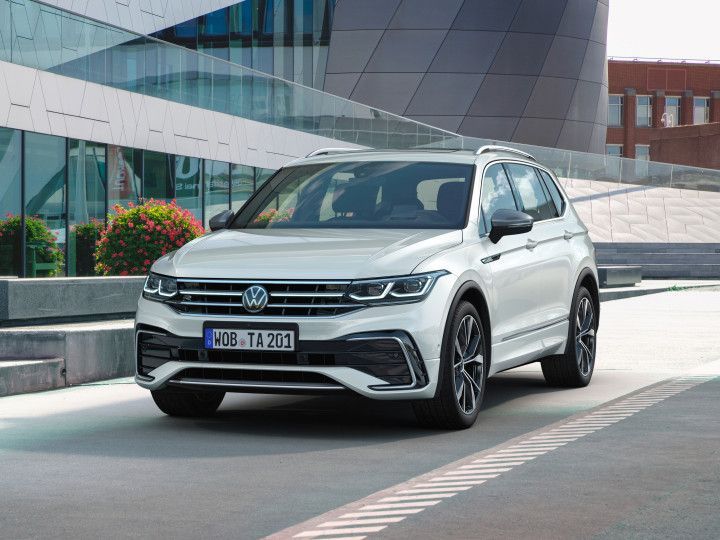 The facelifted Volkswagen Tiguan Allspace with sharper looks and improved tech has finally been unveiled. It’s essentially a long-wheelbase version of the standard Tiguan and comes in both 5 and 7-seater configurations. The design is in accordance with that of the facelifted standard 5-seater SUV that will soon be launched in India.

So it features an angular pair of LED headlamps with VW’s new IQ Matrix technology and a redesigned front bumper that has added an extra 22mm in length, taking the total to 4,723mm. Also, as with all new VWs, a LED DRL connects both the headlamps.

Changes to the side are limited to new alloy wheels that can be had in either 17-, 18-, 19-, or even 20 inches! Topping up the design are a pair of restyled LED tail lamps and bumpers with faux exhausts and a red lightning strip.

Inside, the steering wheel, touch-based climate controls, and the carmaker’s latest MIB3 infotainment system (with connected car tech) have been carried over from the standard facelifted model. Also, you can now access Android Auto and Apple CarPlay wirelessly. That said, audiophiles should definitely consider opting for the new (optional) 16-speaker Harman Kardon system.

The facelifted Allspace also comes with VW’s IQ.DRIVE travel assist, which relies on adaptive cruise control and lane assistance. It basically helps the driver with steering wheel, brakes and acceleration inputs from 0kmph (in DSG models) and 30kmph (in MT models). This system works up to 210kmph.

Other features include massage function for the driver’s seat, a digital driver’s display, tri-zone climate control, a panoramic sunroof, and a powered tailgate.

Under the hood, the Tiguan Allspace will be provided with three turbo-petrol and two diesel engines. If and when it comes to India, it’s likely to retain the 190PS 2.0-litre turbo-petrol engine that drives all four wheels via a 7-speed dual-clutch automatic transmission.

With the pre-facelift Allspace already on sale as a completely built unit (CBU) in India, VW could consider bringing the facelifted model to our shores. Considering the list of expansive updates, the refreshed Allspace is likely to command a premium over the current model that’s priced at Rs 34.20 lakh (ex-showroom). It rivals the Toyota Fortuner petrol and the Skoda Kodiaq TSI.