Initially, the 4-door coupe will come with six-cylinder engines but the V8 is on its way in a new avatar! 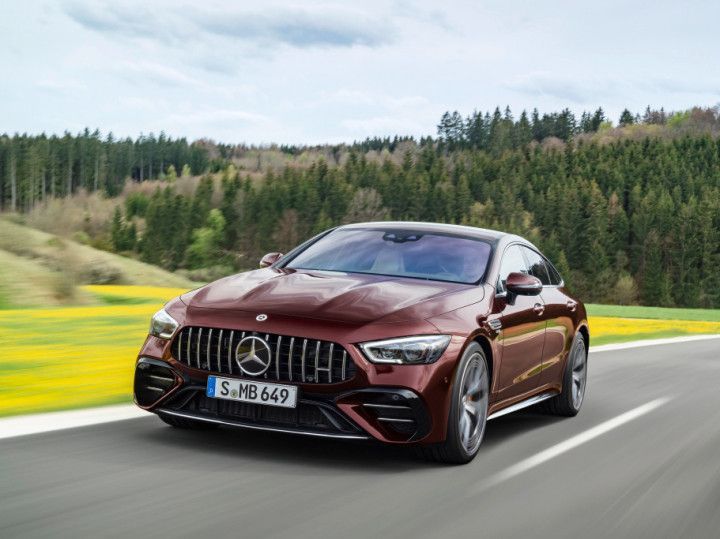 Mercedes-AMG has unleashed the facelifted AMG GT 4-door coupe, featuring cosmetic updates, additional features, and new engine options. Known for its smashing performance, the pre-facelift coupe lapped the 20km long Nurburgring circuit in Germany in just 7 minutes and 25.411 seconds, making it one of the quickest 4-door coupes ever!

The same, however, can’t be said about the initial lot which comes with smaller 6-cylinder engines in two outputs. Both engines drive all four wheels, paired with a 9-speed automatic transmission, and mild-hybrid tech for additional boost during hard acceleration. Here's a quick look at their specifications:

Enthusiasts fret not, the V8 petrol engine will be brought back as a hybrid under Mercedes’ new E Performance range. And the first model that will be introduced with this powerplant is, of course, the GT 73e 4-door coupe. While power specifications are yet to be revealed, Mercedes claims the new 4.0-litre V8 hybrid is capable of putting out up to 815PS and over 1,000Nm, enough to set the Nurburgring on fire!

For now, the V6 engines that offer decent performance on paper, are the only choice. The revised AMG suspension claims to offer a better balance between comfort and sport. This was achieved by a new damping system, featuring pressure limiting valves that adjust the damping force. Also, the various drive modes alter the different parameters of the car.

Once you’re inside, you’ll also appreciate the new twin-spoke flat-bottom steering wheel built out of fine Nappa leather. Mercedes has also introduced several interior customisation options, including new colours for the upholstery and open pore wood inserts for a more opulent cabin. Customers can also opt for contrast stitching for a sportier and colourful look.

Coming to its design, Mercedes has followed the ‘why fix if it ain’t broke’ mantra for the GT 4-door coupe. So it has tinkered around with just the bumpers, colours and alloy wheel designs, all of which give the coupe a renewed life. The rest of the design is similar to the pre-facelift model on sale in India.

It remains to be seen when Mercedes plans to bring the facelifted AMG GT 4-door coupe to India. But we are hoping it offers both the V6 and the V8 hybrid powertrains to cater to a wider audience. It will renew its rivalry with the Audi RS7 Sportback, BMW M8 Gran Coupe, and the Porsche Panamera.