It's Indian. It's electric. And it promises superbike-like performance. What makes it tick? We list down the top 5 facts that do. 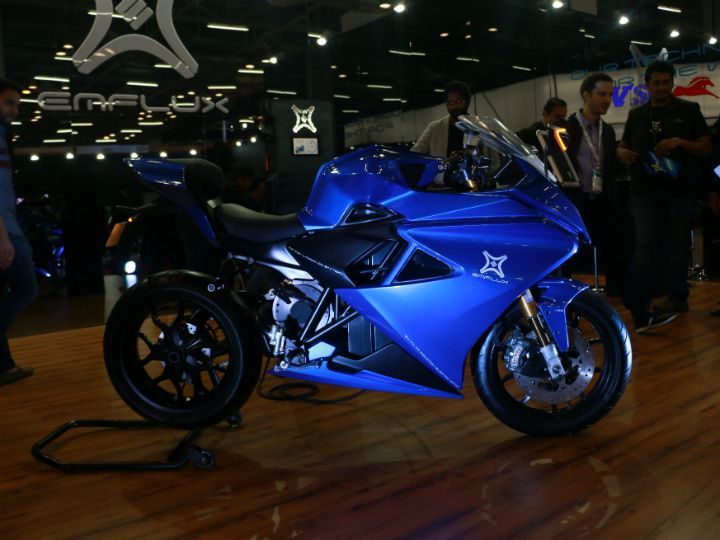 It's no hidden fact that we are slowly transitioning towards all-electric mobility. This was further reinstated by a plethora of electric concepts, prototypes and production-ready bikes and cars being showcased at the Auto Expo 2018. The one that caught our fancy was an Indian-made electric superbike, the Emflux Model One. Here are five quick facts you need to know about it.

The Emflux Model One is designed to have the aggression of a superbike, while being environmentally friendly at the same time. It is quite futuristic, in terms of design with sharp and edgy lines all over.

The riding position is also quite aggressive with a leaned forward position, low-set handlebars and rear-set footpegs. Its appeal is further boosted by the single-sided swingarm. Everything, from its design to the electronics have been completely developed in-house by Emflux. And like any other superbike, it comes with top-shelf components like Brembo brakes with dual-channel ABS, Ohlins suspension (optional) and a substantial list of electronic goodies as well. More on that later.

The Model One is packed to the brim with some interesting features. These include a 6.8-inch TFT instrument screen, through which can you monitor real-time vehicle diagnostics, set GPS navigation, bike-to-bike connectivity and Bluetooth for on-the-go connectivity.

It also comes with a mobile app through which you can remotely monitor charge time, available range and more.

It is powered by a 60kW liquid-cooled AC Induction motor which produces 81.5PS of power and 84Nm of torque, generated at 8,400rpm. According to the company, this helps in propelling the motorcycle from 0 to 100kmph in just 3 seconds before it goes on to clock a top speed of 200kmph.

The Emflux Model One packs a Samsung-made lithium ion battery, that can be charged up to 80 per cent in just half an hour. The company claims a range of 200km on a single charge for the Model One in city riding conditions.

The motorcycle comes equipped with a tubular steel trellis frame, suspended on 43mm front USD forks (upgradable to Ohlins Race and Track USD forks) and a gas-charged monoshock at the rear (upgradable to Ohlins 46mm Monotube Gas shock). Braking duties are handled by Brembo 300mm dual-discs at the front and a single 220mm disc at the rear. It comes with a dual-channel ABS system as standard.

The Model One also supports regenerative braking, which charges the battery every time you brake. Its 17-inch (120/70 front and 180/55 rear) wheels come wrapped in Pirelli Diablo Rosso II tyres.

5) Likely to be priced competitively

The company has claimed that the Model One will be launched sometime in 2019, with a price tag of around Rs 5 - 6 lakh. At this price range, it will directly compete with the Kawasaki Ninja 650, which packs a 649cc, liquid-cooled, parallel-twin engine which churns out 68PS of power and 65.7Nm of torque.

It'll be showcased at the company's experience centres in Bengaluru, New Delhi and Mumbai. However, you will only be able to buy the Model One through an online portal. The company is also planning on subsequently launching a naked street model based on the Model One, called the Model Two.