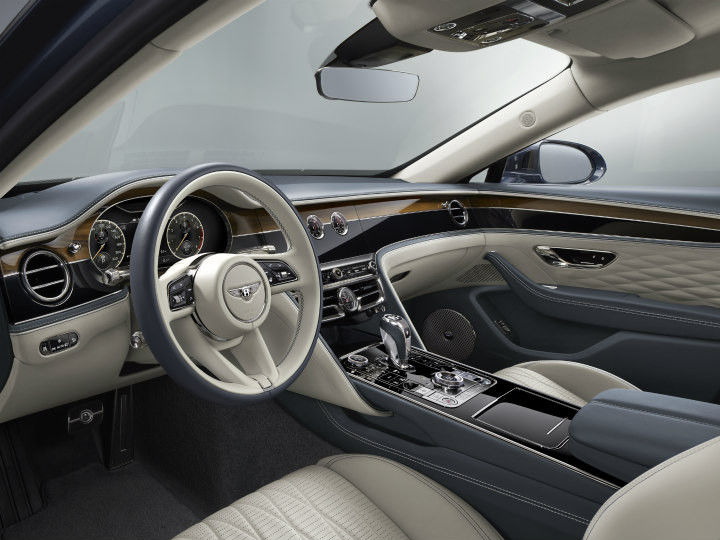 With Bentley bidding farewell to the Mulsanne, the Flying Spur now takes over as the flagship model in Bentley’s lineup. And to live up to its new title, Bentley has added various configuration options for the Flying Spur with the highlight being a new four-seater that boasts plenty of creature comforts.

The new four-seat cabin gets semi-aniline leather, hand-cross stitching as well as a centre console that extends from the front to the rear, separating the rear seats and serving as an armrest. Additional kit for the rear cabin includes a centre console housing a 5-inch touchscreen remote, two cup holders, two USB ports with a 12v power socket, and wireless charging.

Another nifty feature at the rear comes in the form of electronically operated picnic tables that deploy from the rear of the front seats. Interior highlights include veneer inserts all around to complete the premium cabin. A new steering wheel is now standard. It comes with capacitive sensing that allows the wheel to detect when it is being held. This works in conjunction with the car’s semi-autonomous driver assistance systems, wherein drivers are required by legislation to have their hands on the steering wheel at all times.

Other updates to the Flying Spur consist of three new exterior body shades: Viridian, Patina, and Snow Quartz as well as a chrome front grille and blacked-out wheels.

The third-gen 2021 model year Flying Spur has been listed in India. Availability will have to be clarified by dealers. The new 4-seater option is likely to be introduced as well. Expect the new Flying Spur to be launched at a premium over its predecessor that retailed from Rs. 3.21 crore to Rs 3.41 crore (ex-showroom Delhi). Rivals include the Rolls Royce Ghost.