We got our hands on the recently introduced Bajaj V12. Here are our first impressions on the motorcycle 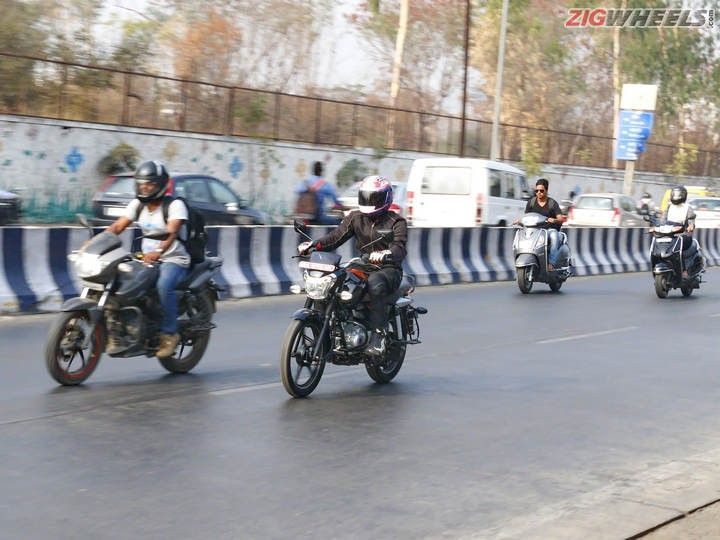 Bajaj Auto had launched the V15, a premium 150cc segment motorcycle that pays tribute to the iconic decommissioned aircraft carrier INS Vikrant. Since its launch last year, the bike had gained a lot a popularity due to its styling, patriotic influence and low sticker price. Now, in order to make the V-series more accessible to buyers, Bajaj recently launched a more affordable version of the bike and christened it the V12. The bike is powered by a 125cc mill which has been developed from the ground up. It carries a sticker price of Rs 56,283 and is around Rs 6000 cheaper than the V15. We spent some time with the motorcycle to provide you with our Initial impressions on the V12.

At first glance, it is easy to mistake the V12 for the more powerful V15 though there are subtle styling differences. The 5-spoke alloy wheels have the same design but have slimmer spokes which reduces weight and saves on the amount of metal being used. Bajaj has continued with the same graphic design pattern for the V12 but with a different graphic shade. The beefy telescopic forks have been replaced with slimmer ones for the V12. The bracket for the rear footrest now uses Mild Steel instead of the Aluminium ones on the V15.

In terms of equipment, Where the V15 had a digital fuel gauge, the V12 features a full-analog instrument cluster with an analogue fuel-gauge. The ignition key insert slot is moulded in plastic instead of aluminium. All the above changes in equipment and parts have been carried out by Bajaj in order to keep costs as low as possible without missing out on the design aspect and feel of the bigger V15.

The 124.5cc motor is a new one but not an all new one. It has been developed from the ground up but uses parts from both the V15 and other bikes in the Bajaj stable. The engine has a longer-stroke which gives it good low- and mid-range poke. The motor has the highest torque output amongst the current 125cc motorcycles in the segment. The V12 is equipped with a 5-speed constant mesh gearbox. The gear ratios are suited for city commuting.

The V12 has good ride quality. Bajaj has revised the spring rates for the suspension in keeping with the segments demands. The suspension is capable of absorbing potholes and bad roads well and doesn’t bottom out even with a pillion at the back. The V15 ‘s suspension is a bit on the firmer side owing to the need for sportiness. Despite the V12’s suspension being more compliant, it exhibits stable handling. The V12 runs on 2.75-18 section tyre and 100/90-16 section MRF Zapper Kurve tyres at the front and back respectively. The tyres are skinnier than the V15 but offer good grip in the dry and contributes to good handling capabilities for a 125cc offering.

Braking duties on the V12 are handled by drum brakes on both ends. The setup offers a progressive feel and decent bite on application of brakes. Although a disc brake setup is not yet available, expect Bajaj to include it later depending on the demand in the market.