5 Reasons Why The TVS Zeppelin Concept Is Cool

The performance cruiser was one of the coolest two-wheelers to come out of the Auto Expo 2018. Here’s why 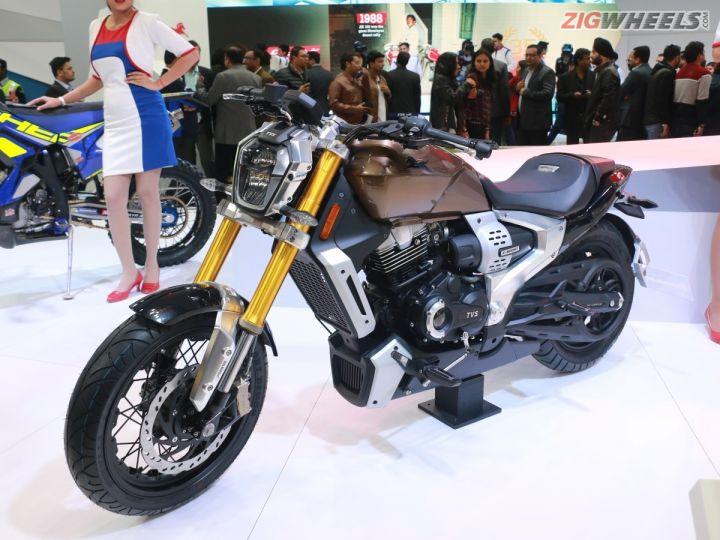 The Zeppelin was the star attraction at the TVS pavilion at the Auto Expo, besides the TVS Creon. We think its cool factor is not just because of its looks but far beyond that. Here are 5 reasons.

It’s A First For TVS
TVS Motor Company is best known for their scooters and the Apache range of motorcycles. If the recently launched Apache RR 310 and the NTorq 125 are anything to go by, it points towards a company working towards a new direction. Innovation is certainly one of the first attributes that come to mind. The unveiling of the Creon electric scooter, the Apache RTR 200 FI Ethanol and the electric hybrid component on the Zeppelin show that the Hosur-based manufacturer is not only moving towards electric mobility but also exploring the introduction of bikes powered by other sources of fuel. The Zeppelin is also the first cruiser concept from TVS.

Larger 220cc Engine
The Zeppelin concept featured a new 220cc motor which sends power to the rear wheel via a belt drive, which is another first for TVS. A belt drive has a silent operation and requires low maintenance when compared to a chain drive. It does get an electric motor to boost power. While the engine on the concept looked like an air-cooled unit, an interesting feature we noticed was the dummy radiator shroud at the front. Could this mean that the production version of this cruiser will come packed with a more powerful liquid-cooled engine? We’d like to think so.

E-boost
The power cruiser is not just a design exercise. It showcased a new engine and a new technology which TVS likes to call E-boost. It has even patented this integrated starter generator system which comprises of a 1200W (1.6PS) electric generator and a 48V lithium-ion battery that is charged via the motor. The technology is similar to the SHVS system seen in select Maruti Suzuki cars. The difference, however, is TVS claims the system will boost both performance and fuel efficiency.

HD Action Cam Built Into Headlamp
If you weren’t paying close attention, you might have missed the HC action camera integrated into the headlamp housing. It is an interesting addition given a lot of youngsters have started recording their rides via action cams. It also opens up new avenues for camera-based navigation. However, that would probably not make it to production given the cost constraints.

It Looks Production-ready
While most concepts feature elements that don’t make it to production, we are hard-pressed to pick parts that could be axed for the final road-going version. Although the Zeppelin is not a conservative design, it looks production ready. Some of the components seen on the concept can be found in other TVS motorcycles. The front forks, front brake setup and the switchgear have all been borrowed from the Apache RR 310. The 110/70 R17 front and 140/70 R15 rear tyres are Pirelli Sport Demon units.

What this means is that TVS could launch a production version as early as the end of this year or early next year. If TVS packs in all the features shown on the concept, we expect TVS to price it around the Rs 1.5 lakh mark. However, our bet is on TVS dropping some of the features to position the Zeppelin as a worthy alternative to the Bajaj Avenger 220 range and the Suzuki Intruder 150. Stay tuned for more information.