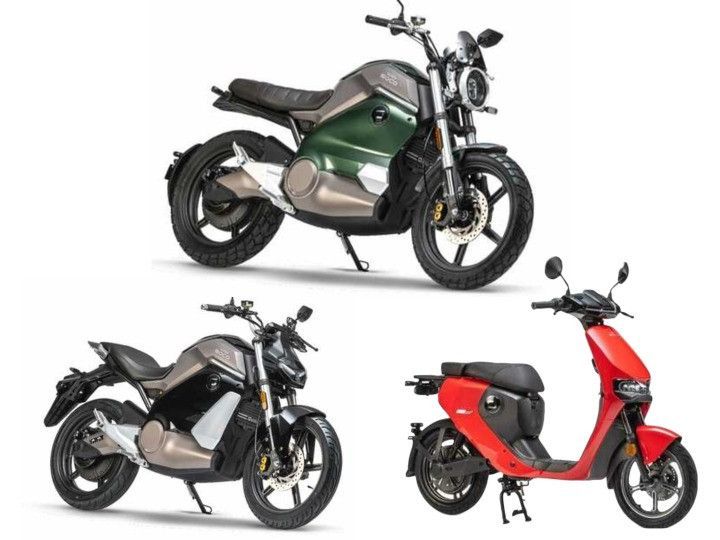 Super Soco had teased its upcoming sporty naked e-bike in January 2021 followed by another teaser of its retro-styled motorcycle just a month later. Now, the Chinese brand has unveiled its 2021 lineup comprising two new electric motorcycles and an e-scooter. The motorcycles are called the Super Soco TC Wanderer and the TS Street Hunter while the scooter is called the CUmini.

The TC Wanderer is essentially another variant in Super Soco’s retro-styled TC lineup. Following the retro theme, the Wanderer features a round headlamp, simple bodywork, a small flyscreen, and a flat cafe-racer type seat. However, don’t be fooled by its retro appearance as the bike sports modern bits like a circular digi-analogue instrument cluster with a security alarm, keyless ignition and three riding modes, a USD fork, disc brakes at both ends, and full-LED lighting. It also gets dual-purpose tyres.

Interested in EVs? Read our review of the fastest e-scooter in India.

Like the TC lineup, the TS badge also refers to something and its sporty naked motorcycles. Owing to this, the new TS Hunter gets an edgy LED headlamp (resembling the 2016 Yamaha MT-09), gloss panels, and a sculpted seat. For comfort, the bike gets triple density foam in the seat and wide handlebars for relaxed ergonomics. It also packs a fully digital LCD instrument cluster, single disc brakes at both ends, Combined Braking System (CBS), USD fork, and 17-inch tyres shod with road-biased rubber.

Coming to the numbers, both motorcycles are powered by a 2.5kW rear-hub motor putting out 180Nm of torque, which can propel the bikes to a top speed of 75kmph. The battery pack consists of two 32Ah batteries with a maximum claimed range of 200km. Impressed? Don’t be, as this range is claimed at a crawling speed of just 25kmph. At ideal city speeds, expect a range of just around 120km.

Last in the lineup is the Super Soco CUmini. The e-scooter looks small with basic design elements and rides on 12-inch tyres. It is designed for urban mobility, hence it is powered by a small 600W continuous motor. Additionally, it features a swappable 20Ah battery that weighs just 7.8kg and offers a range of 60-70km. As for features, the scooter gets LED lighting and keyless startup. One can also track its alarm status, GPS position, battery charge, and other data via Super Soco’s smartphone app.

While there’s no news on pricing and availability as of now, judging from the specs, the e-bikes look like direct rivals to the Kabira KM 4000 and the KM 3000, which were recently launched in India, while the Super Soco CUmini could rival the Ampere Magnus Pro.