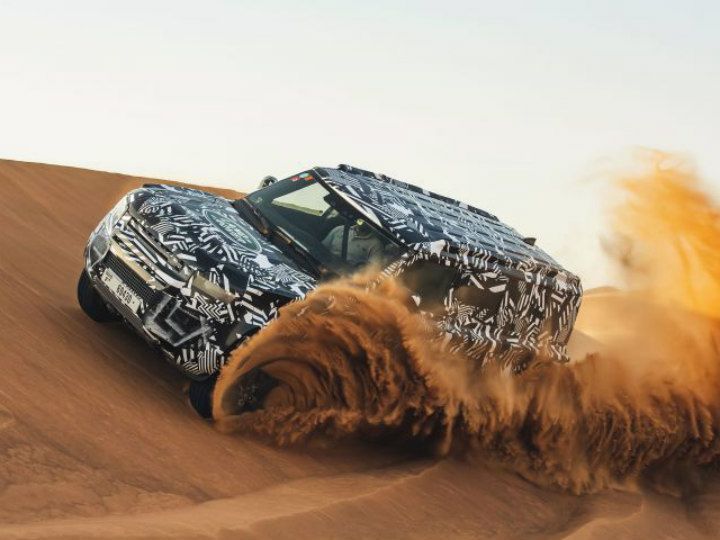 It has been a long, long wait for the rebirth of the Land Rover Defender. After a gap of nearly three years, the iconic SUV has finally been spotted testing undisguised. That too on the sets of the upcoming James Bond movie No Time To Die. And now Land Rover has released an official teaser video which reveals that the 2020 Defender will debut on September 10 during the first press day of the 2019 Frankfurt Motor Show.

Land Rover will be livestreaming the reveal event as well as taking orders for the rugged SUV at the same time. We already know from earlier spy photos that new Defender borrows some styling cues from its predecessors. It still retains a butch appeal, but in a more polished manner. At the front, some traditional Defender bits include a large hood, pronounced wheel arches and a boxy design. The new SUV also retains Alpine windows that are mounted high up in the roof above the side window panel. Other cosmetic additions include a new pair of headlamps and blacked out badges.

The cabin of the SUV that was spied some time back revealed a futuristic setup. Some interior highlights include ergonomic and chunky controls alongside a new four spoke steering wheel that features electric rake and reach adjustment. It will likely feature dual zone climate control, a touchscreen infotainment system with Android Auto, Apple CarPlay and in-built navigation.

A spec sheet of the Defender was also leaked earlier this year, giving us a glimpse of what to expect. According to it, the SUV spotted will be offered in the 110 body style with 5/6/7 seats options as well as the Defender 90 (5/6 seats) and the Defender 130 (8 seats) trim.

The 2020 Defender is expected to be offered  in the Standard, S, SE, and HSE and X variants. While there is no word yet on when the new Defender will make it onto Indian shores, we can expect some updates after its international reveal. Once launched, it will rival the likes of the Mercedes-Benz G-Class as well as the Jeep Wrangler Rubicon.