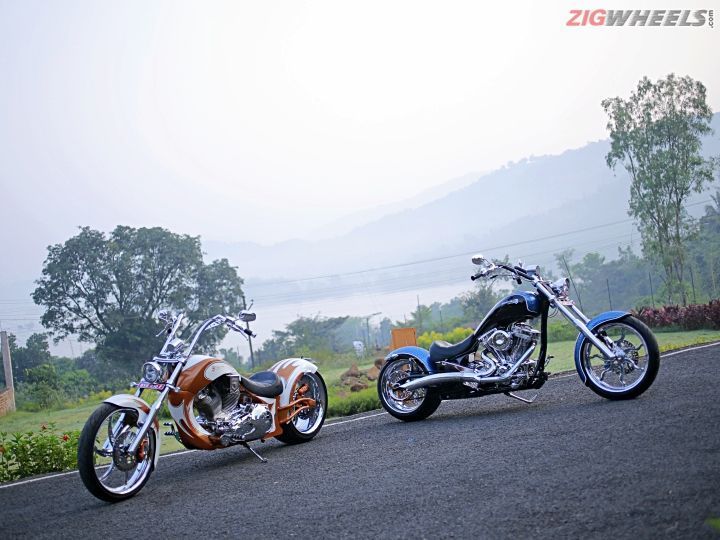 India-based chopper manufacturer and the latest entry into the Indian biking scene, Avantura Choppers will showcase its first two models, the Rudra and Pravega, officially at India Bike Week (IBW) on November 24th. The Rudra has been launched at a price of Rs 23.9 lakh while the Pravega carries a price tag of Rs 21.4 lakh, ex-showroom Mumbai. Unlike other chopper builders, Avantura Choppers is the first bikemaker to build its motorcycles in India rather than importing them. The biking festival, where enthusiasts from across the country converge, could very well be the perfect opportunity for the new brand to showcase its extremely attractive products.

The Avantura Rudra and Pravega choppers are designed by Kevin Alsop, a prominent name in the chopper design arena and also the founder of Big Bear Choppers in the US. What differentiates these choppers from a cruiser is the long rake. The dual-tone bikes come with a classic round headlight, a teardrop-shaped fuel tank, a single but wide saddle and a chunky rear mudguard finishing the look of the bike. The Rudra is more minimalistic and naked than the Pravega. It almost looks skeletal in comparison to the bulky and well built Pravega. Both the bikes flaunt their forks, wheels, handlebars, engine and exhaust with chrome while the rest is clad in interesting graphics.

At the heart of both the bikes sits a 2000cc, air- and oil-cooled V-twin engine from American engine builder S&S Cycles. To receive certification from ARAI to make it road legal, the company has re-engineered the engines. So, while the engine can ideally generate 130PS of peak power and 180Nm of peak torque, it will be detuned to suit our fuel quality (or the lack of it). The official power figures of the Avantura choppers aren’t out yet and can be expected during IBW. For transmission duties, it employs a 6-speed gearbox.

Both the bikes get a single analogue pod to display the tachometer, with a small digital screen inside it that displays the speedometer. Telescopic forks sit at the front and a linked monoshock setup does duty at the rear. Both bikes offer a ground clearance of 150mm and the saddle sits low at 600mm.

Bringing both bikes to a standstill are Beringer disc brakes with six-piston callipers on both ends. This is not where the bikes’ international affairs stop: the seat is from Mustang and the LED turn lights are from Kellerman in Germany.

Like any other chopper out there, a lot of customisations options are available to personalize your Avantura motorcycle to your own identity.