Tata Brings The Kaziranga Theme To Its SUV Lineup

Based on the standard models’ top-spec variants, these special edition Tata SUVs get a new splash of colours as well as a few feature add-ons 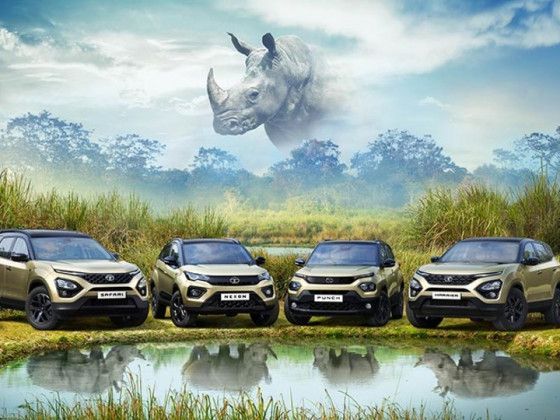 After a long campaign of teasers, Tata Motors has launched the Kaziranga Edition for its entire SUV lineup which includes the Punch, Nexon, Safari, and Harrier. Paying homage to the one-horned India rhinoceros in Kaziranga, these special edition SUVs are based on their respective top-spec variants, and will get unique bits to stand apart.

So what are the common bits special in the four SUVs? For starters, they get a Grassland Beige body shade with a dual tone black roof, blacked-out wheels, and rhinoceros badges. Inside, they’re equipped with an all-black dashboard, contrasting beige on the seats and door pads. While the Nexon, Harrier and Safari get a wood centre trim finish, the Punch has a beige finish. Here’s a closer look at what separates each of these Kaziranga Edition SUVs from their standard counterparts.

For the Punch Kaziranga Edition you’ll have to shell out an extra Rs 20,000 compared to the standard model. Aside from the new splash of colours all over, this special edition model is based on the top-spec Creative and gets all the bells and whistles without any additions. It also gains the i-RA connected car technology which is optional as part of the Creative i-RA pack.

Heading into Tata’s bigger SUVs, the Harrier Kaziranga Edition gets all the bells and whistles from the top-spec XZ+ and adds ventilated front seats, i-RA connected car tech, an air purifier, as well as wireless Android Auto and Apple CarPlay.

The Safari Kaziranga Edition doesn’t really get any unique add-ons as the likes of ventilated seats, wireless charging, wireless Android Auto and Apple Carplay were already introduced in the Gold Edition.

Since Tata’s Kaziranga Edition SUVs are largely cosmetic upgrades, the mechanicals remain unchanged. The flagship Harrier and Safari are powered by a 170PS 2-litre diesel engine, while the Punch is limited to the 86PS 1.2-litre petrol motor. The Nexon can be specced with either a 120PS 1.2-litre turbo-petrol and 110PS 1.5-litre diesel unit.

Considering Tata’s Kaziranga Edition range of SUVs pay homage to the one-horned India rhinoceros in Kaziranga, the carmaker had recently put up the first Punch Kaziranga unit up for auction. The proceeds will be auctioned and will go to conservation efforts at Kaziranga.