Earth Energy Launches Its Made In India Electric Two-Wheeler Range

The offerings include a scooter and two motorcycles. 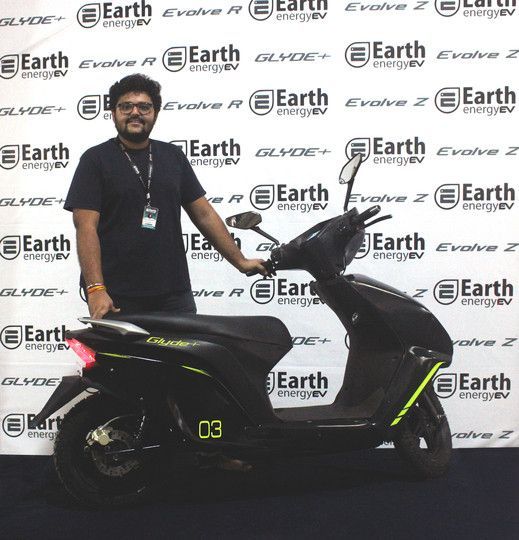 Earth Energy has launched its range of electric two-wheelers in India. It consists of a scooter, a naked motorcycle, and a cruiser motorcycle called the Glyde Plus, the Evolve Z and the Evolve R, respectively. The company claims that all three vehicles have undergone extensive real-world testing for over two years and have clocked around 6,00,000km in the last seven years.

Earth EV is a Mumbai-based start-up involved in the production of electric two-wheelers and commercial vehicles. Thanks to its extensive in-house production of parts, the company claims that it has achieved 96% localisation while aiming at 100% in the future. All production and R&D activities take place at Earth Energy’s plant on the outskirts of Mumbai that’s capable of producing 12,000 units per year

Earth EV will offer all vehicles in three colour options: Marshal Grey, Jet Black, and White. Race decals will be offered at an additional cost. All of them offer LED lighting, a 5-inch digital instrument cluster with switchable day/night layouts, and a dedicated Earth EV app as standard. Information like battery percentage, speed, and adaptive range are shown on the display, along with turn-by-turn navigation. Service bookings with pickup/drop can be scheduled from the app too.

To ensure safety, the scooter comes with a combined braking system while both motorcycles get ABS as standard. We’ll break down other bits one by one. Interested in e-bikes? We recently spied the upcoming Kabira KM 4000 testing on Indian roads.

Glyde Plus
The Glyde Plus is priced at Rs 92,000 (on-road), making it one of the cheapest electric two-wheelers in the market. Aimed at commuters, the scooter boasts spacious and comfortable ergonomics. It makes 2.4kW of power and 26Nm of torque along with a claimed top speed of 60kmph. The 52Ah lithium-ion battery can return a range of around 100km with a minimal charging time of just 2.5 hours while a fast charger can charge it from 0 to 80% in just 40 minutes. Expect the Glyde Plus to reach dealerships in a couple of weeks.

Evolve Z
The Evolve Z can be deemed a sporty commuter motorcycle and according to the brand it takes its design cues from diamonds. As for numbers, the Evolve Z churns out 5.3kW of power and 56Nm of torque. It can reach a top speed of about 95kmph. The total range of the 96Ah battery is close to 100km with similar charging times as the Glyde. Expect it to reach dealerships by mid-April 2021 with a price tag of around Rs 1,30,000.

Evolve R
The Evolve R is India’s first electric cruiser motorcycle, and it stands out with its swept handlebars. The R is the most powerful out of the three offerings and makes 12.5kW of power with 54Nm of torque. Consequently, it has the highest claimed top speed of 110kmph. However, it runs out of juice after 100km even with a big 115Ah battery and the claimed charging times are the same as the other two. Like the Z, expect the R to also reach dealerships by mid-April 2021, but with a price tag of around Rs 1,42,000.

As for maintenance, Earth EV claims service costs to be 20-30% lower than commuter petrol offerings. Bi-annual service plans will be followed. The manufacturer will also set up home charging stations for owners and all two-wheelers can be charged at dealerships too. For added ease, all three vehicles are compatible with every public charging station in India.

Interested? You can book either two-wheeler for just Rs 1000 (refundable) and the bookings have begun as we speak. While Earth EV plans to initiate offline bookings soon, only online bookings via its website are available currently. An online store where one can buy related accessories will also go live tomorrow.

In the market, the Glyde Plus faces real competition from the Ather 450X, TVS iCube, and the Bajaj Chetak. Read our review of the Ather 450X to know why Earth EV should be worried.