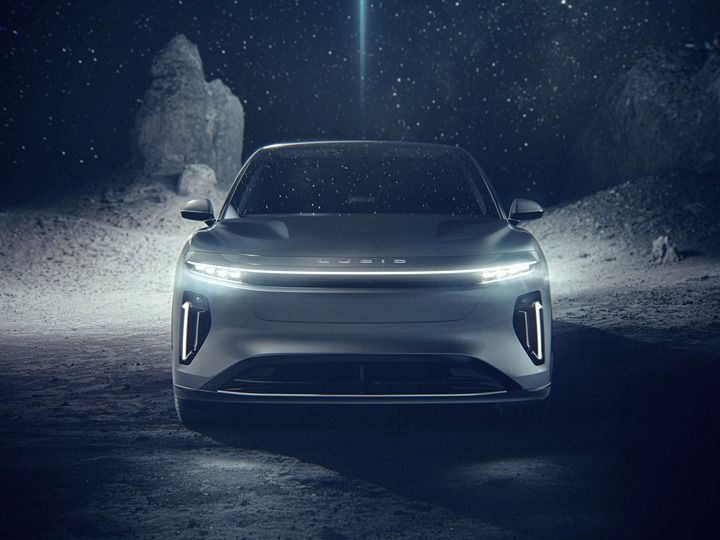 Lucid Motors, America’s Tesla-beating electric carmaker, has given us a first look at its upcoming electric SUV. Called the Gravity, the SUV will offer similar luxury and comfort alongside bucketloads of power as the existing Air sedan. It’s expected to be a top-dollar premium electric SUV that’ll go on sale in the North American market in 2024, while the launch timeline for other countries will be announced in the future.

Lucid Gravity: What the teaser reveals

In terms of aesthetics, the Lucid Gravity seems to follow the same long, sleek design language as the Air, taking several design cues from the sedan. At the front, it features the same full-width DRL, narrow LED headlights, vertical side air dams and a big trapezoidal vent at the base of the bumper.

We haven’t got a good look at its rear, but the teaser shows the SUV will get full-width connected LED taillights with ‘Lucid’ lettering, an upright tailgate and a prominent roof spoiler.

Inside, the electric SUV gets a full panoramic glass roof and seating for up to seven people, depending on the variant. It will also be offered with reclining second row captain seats among a slew of other luxury features and creature comforts.

“It is both a supercar in disguise and an SUV with flexible passenger and cargo space that seems impossibly big relative to the exterior size of the vehicle.” – Derek Jenkins, Senior Vice President of Design, Lucid Group.

The Lucid Gravity SUV will be equipped with the carmaker’s Glass Cockpit that comprises a single curved panel with the driver instrumentation and infotainment/navigation displays and a separate touchscreen called the Pilot Panel for infotainment and other in-car functions. It’ll be backed by the next-generation Lucid UX interface.

We’ll get to know all about the Lucid Gravity in the coming months as we get closer to its debut in early 2023. The SUV is intended for the North American market and isn’t likely to be offered in India for now, but if it does come to our shores, it’s bound to be incredibly expensive – even the base-spec Air sedan costs the Indian Rupee equivalent of over 70 lakh in its home market. It’ll rival the BMW iX, Audi Q8 e-tron and the upcoming Mercedes EQS SUV and the all-electric Range Rover.