With 120kmph top speed and 150km claimed range, justice will be swift and silent! 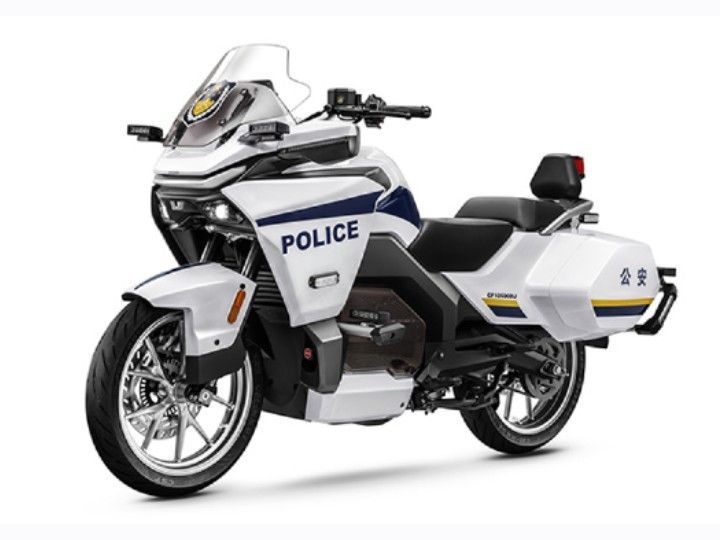 “Purpose-built to meet the demands of police departments across China’s mega cities,” says CFMoto with regard to the 300GT-E, its first-ever electric motorcycle. Cops on electric motorcycles roaming the streets of some mega city seems like a page straight out of some science fiction movie, no?

image for representation only (source:wallpaperaccess.com)

Well, with the electric mobility age upon us, the future is here, and science is blurring the line between fiction and reality quickly. As Chinese bikemaker CFMoto ushers in its electric portfolio with its 300GT-E, it’s also giving us a peek into its upcoming electric sub-brand. And through the courtesy of a new patent filing, here are some key details you need to know about CFMoto’s upcoming electric motorcycle:
The design looks like a typical brawny American cop cruiser. It’s said to feature three riding modes, including a reverse mode. Running on 17-inch alloy wheels, the bike’s suspension comprises a USD fork up front and monoshock in the rear and braking is supported by ABS from Bosch.
The battery pack’s structural alloy case is versatile enough to mate it with different motors and underpinnings. CFMoto claims it can offer varied performance and design using a single platform.

image source: cycleworld.com
The liquid-cooled motor on the 300GT-E is a 144-volt unit rated at 10.5kW (14.27PS) of continuous power with a peak power of 16.8kW (22.84PS). That said, with a fairly decent 54.2Nm of torque, this motorcycle should offer performance comparable to a 300-400cc motorcycle. CFMoto claims a top speed of 120kmph and 150km range from a single charge (unlawful citizens know what to do to outrun cops now eh!).

Weighing 224kg, the 300GT-E is a heavy motorcycle given the power it offers. But we suspect most of that weight could be from heavy duty equipment like the onboard connectivity system that allows on-the-fly communication and access to police databases. The EV also features a 7-inch TFT display and keyless ignition. The patent shows handlebar mounted switch cubes to toggle between functions.
With the 300GT-E rolling in, tickets will hopefully arrive in a swift and silent manner!