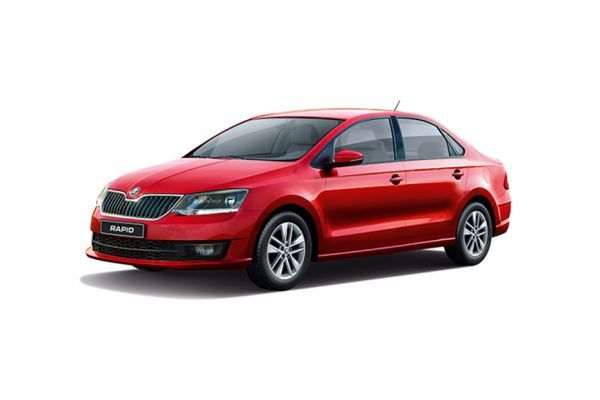 Skoda India will offer the 2020 Rapid with a 6-speed torque converter automatic.

Skoda India has revealed the Rapid BS6 at Auto Expo 2020. It comes with a new BS6-compliant 1.0-litre TSI engine that develops 115PS and 200Nm. The Rapid TSI will be available with a 6-speed manual and 7-speed DSG. The 1.5-litre TDI and 1.6-litre MPI engines in the Rapid won’t be upgraded to meet BS6 norms.

The Monte Carlo version of the Rapid BS6 was showcased at Auto Expo. It features bigger 17-inch wheels. Further, Skoda will also introduce the Rapid with a Matte paint scheme.

Skoda will launch the Rapid BS6 in April 2020. Expect it to cost more than the current Rapid, which starts from Rs 8.82 lakh (ex-showroom). The Rapid BS6 will lock horns against the 2020 Honda City, Maruti Suzuki Ciaz, Hyundai Verna and Volkswagen Vento BS6.

Q. How's your experience as a Skoda Rapid owner? View All Answers
Q. Is it worthy to buy Skoda Rapid petrol automatic? View All Answers
Q. Is rear parking camera available in Skoda Rapid 2019 model?
Q. I am looking for Skoda Rapid Deisel Car. May I know the overrall performance of this car
Q. How is the experience, service, power and everything - Rapid?
Q. What would be the average mileage for a diesel automatic? and what about its maintenance costs - Rapid?
Q. I need a AT Diesel driver compatible sedan. Is it a good idea to buy a Skoda Rapid AT before if gets scrapped in the BSVI era? View All Answers
Q. I have Skoda Rapid Active base model. Can I get automatic climate control instslled in my bsse variant beause it doesn't look good.
Q. Is this a right time to buy Skoda Rapid diesel transmission?
Q. Rapid is preferd or superb ..??? Which automatic model is preferred in rapid( petrol)
Q. Is Rapid diesel an expensive car to maintain as compared to others?
Q. Skoda Rapid petrol has CVT or DSG transmissions?
View More Questions All Rapid Questions and Answers

A very reliable and more importantly affordable, the Rapid is the Skoda’s bet against the likes of Honda City, Maruti Ciaz, Hyundai Verna and its own cousin VW Vento. Skoda has got spot-on with the styling and the clean lines add the air of sophistication to Rapid’s design. Rapid’s cabin oozes quality and upmarket feel and the choice of material subscribes to the luxurious standards. Surprisingly, the cabin is spacious enough to accommodate the three adults abreast at the back and the trunk is equally accommodating. Power flows to the front wheels of Rapid via either a 5-speed manual transmission or a 7-speed DSG and the engine options include 105PS/153Nm, 1.6-liter petrol and 110PS/250Nm, 1.5-liter diesel motor. The Skoda Rapid is retailed in India in the price range of Rs 8.49-13.77 lakh (ex-showroom, Delhi) and currently acting as the starting, base line model in Skoda’s stable.

The Rapid can be had in three variants - Active, Ambition, and Style. There’s an Edition accessory pack as well, that adds black accents and black upholstery apart from an all-black dash. All engine-gearbox options are available in all variants, save for the diesel-automatic that can be had in the top-spec Style variant only. If it’s value for money you’re looking for, pick the Ambition variant - it’s the best blend of flash and functionality.

Skoda’s ageing sedan got a fresh shot of botox in late 2016. The design is now in-line with the Czech automaker’s global lineup, courtesy the larger ‘butterfly’ grille and the smoked out projector headlamps. Changes to the profile and the rear are next to none, save for a new set of 16-inch alloy wheels, a reworked bumper and revised detailing for the taillamp. The redesign doesn’t do much to hide the age of the sedan, but there’s no denying it’s classy. We have to give a special mention to the rock-solid build quality; the Rapid feels like it’s built to last.

The design of the cabin remains unchanged with the update. The colour scheme, though, has been updated to beige and black, which does make it look a lot livelier. The equipment list features the usual suspects - automatic climate control, a 6.5-inch touchscreen, cruise control and rear AC vents. The show-off features such as a sunroof, ventilated seats et al are missing from the list though. Skoda has also silently updated the feature list of the Rapid, replacing dual airbags with four. This, in our books, is a very good move!

Honda City : The City continues to be the most desirable sedan in this lot. It’s got the looks, the tech and more importantly - that oh-so-illustrious ‘H’ badge on the grille. It’s fun to drive, and has enough space to shame cars from a segment above. Looking for a big car experience? Dial H for Honda.

Hyundai Verna : Looks suave, is loaded with features you didn’t know of, and most importantly - doesn’t ride like it’s got pogo sticks for wheels. If you can make peace with the limited room at the rear, the current generation is the best Verna ever!

Volkswagen Vento : It’s ageing, but it’s far from being dated. If you’re keen on driving (fast) yourself, the dual-clutch transmission on the Vento will be a more-than-willing partner in crime. It’s got a stiff ride, but the basics of space, practicality and ergonomics have been nailed to the T.

Maruti Ciaz : There’s nothing that makes you go ‘wow’, but it doesn’t let you whine either. Yes, it’s a bit boring to drive and it could do with some more features. But, if you need a no-nonsense car to be chauffeured around in without burning a hole in your pocket, the Ciaz should be in your garage.

There’s not much to dislike about the Skoda sedan. With the facelift, it looks as premium as ever, and packs in more tech. If you feel the Vento is a bit out of reach, pick the Rapid. It’s practically the same package delivered with a smaller pinch to the wallet. Yes, it’s a tad bit old and could do with some more features, but that build quality does make up for a lot!