Renault’s Kwid has come in as the hugely successful Maruti Suzuki’s Alto challenger. Can it better India’s favourite small car? 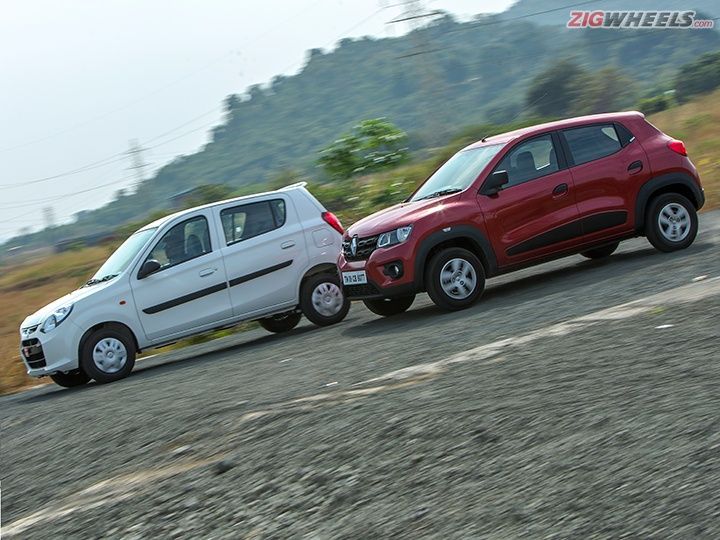 Despite the exponential growth of the Indian car market, it’s the bottom rung of the ladder that catches the fancy of the some of the biggest manufacturers. Sure there’s more luxury cars being driven of showrooms today than ever before but small cars are continue to be the bread and butter given their sheer volumes. That said it would only be right to say the Maruti Suzuki Alto is unofficially India’s favourite small car. It outnumbers everything in its segment by huge margins and has helped Maruti become a household name. The formula has been quite simple actually – terrific affordability, reliability and efficiency all packed into a compact body designed to appeal to the masses.

Many manufacturers have tried to unsettle the Alto, but with limited success – and that’s even when the cars in question were great products on their own. A lot of eyebrows were raised when Renault announced plans to launch a car in the Alto’s territory then, especially since the French manufacturer is far from being recognised as a volumes player in India. It’s only success in the country has been the Duster, which revolutionised the compact SUV segment in the country and set cash registers ringing like never before for Renault. The Kwid holds immense promise for the car maker, as Renault seems to have stirred up the right concoction with its small car. For the record, it ticks more boxes than the Alto has, like attractive design and features like navigation, Bluetooth connectivity and more. With its kind of ammo, the Kwid seems poised to take the Alto head on. On paper at least. So drive them back to back we did and the results, I may add, might surprise.

The Kwid’s strongest appeal lies in its SUV-like design. Renault has styled the Kwid to look like a smaller version of its Duster. Head on, the Kwid is easily the best looking micro-hatch with its large grille, rectangular headlights and muscular hood that give it the appearance of an SUV, and I don’t need to tell that’s a form of the automobile Indians love. The Alto in comparison tries to look cute with its typically Japanese design but its styling is getting long in the tooth. With the Kwid, Renault has thus added some much needed panache to the micro-hatch category, which is a segment where affordability and efficiency rule the roost, while design isn’t much of an ask.

Where the Kwid’s design lacked appeal is its side profile, and even its black-coloured door handles and black rear view mirrors are an eyesore. As you move to the rear it begins to look a lot more appealing once again, thanks to its simple back end. Just the Renault lozenge and the Kwid name at the rear give its backside a neat look. It is easily the best looking small hatch from the rear, especially since (thankfully!) the Kwid doesn’t get any garish looking chrome at the back. The black cladding on the sides and high ground clearance add to its SUV stance, and the Kwid will find a lot of takers simply because of its design, in stark comparison to the Alto which sells, but hardly for its design.

Kwid doesn’t surprises once you sit inside too, this time with the amount of space and features it offers. It is quick to offer an upmarket feel, something the Alto fails at miserably. Its steering wheel looks more premium thanks to a better finish than the Alto’s, which feels basic and is thinner too. The Kwid’s dash gets a two-tone finish with a gloss-black centre console and these aspects together make the Kwid’s interiors feel way better than the Alto’s all grey dash. The Kwid’s trump card though is its touchscreen infotainment system that has Bluetooth connectivity and navigation. These are features unheard of in the micro-hatch segment, and do their bit well in making the Alto feel dated with its single-DIN audio system that only offers USB and AUX connectivity.

The Kwid’s instrument cluster is all digital as compared to the Alto’s large analogue speedometer, and it even gets a trip computer with information like range, instant efficiency and so forth, again unheard of in the segment. It has its set of quirks though, like the fact that Renault expects you to adjust the ORVMs from the outside even today by moving the mirror itself, while the Alto lets you adjust them manually from the inside. Another quirk is the matte black finish of the ORVMs even on the top variant, which feels a bit cheap. The Alto’s plastics and overall fit-finish levels feel better than the Kwid though, especially the plastics that offers a built to last feel.

Under their hoods both cars sport 800cc three-cylinder engines that have been tweaked to squeeze efficiency from every single drop of fuel going into them. The Kwid makes 54PS and 74Nm of torque while the Alto has 48PS and 69Nm on offer. The Alto feels peppier and more eager to accelerate even with lower outputs, and that’s despite the Kwid being lighter at 660kg compared to the Alto’s 725kg. Credit that to the fact that the Suzuki has had this engine for eons (pun intended!) and has been making it peppier and smoother over the years. Renault on the other hand has just developed this three pot motor for the Kwid, and it does not feel as smooth or refined as the Alto’s engine, which boasts lower NVH levels.

Drive both cars back to back and it doesn’t take you time to realise that the Alto holds an edge in terms of performance and handling over its newest rival. Small cars aren’t designed to be great handlers but the Alto feels relatively sportier. Both cars use electric power steering systems but the Alto’s unit offers a more weighted feel and better feedback. The Kwid also seemed to have more understeer than the Alto, which felt slightly quicker to turn in even with its smaller 12-inch wheels that are shod with thinner 145-section tyres as compared to the Kwid’s 155-section 13 inch rubber.

Not that the Kwid lags behind but you know its taller suspension and resultant SUV-like ground clearance of 180mm take away some bit of confidence when pushing it hard around corners. However it is this very setup gives that gives the Kwid an edge over the Alto in terms of ride quality and passenger comfort. It cushions you well on broken, uneven tarmac while the Alto’s slightly stiffer setup means you are sacrificing that wee bit of comfort in favour of the sportier handling. Now coming to the all-important question of fuel efficiency, the Kwid claws further advantage here, with a claimed fuel efficiency of 25.17kmpl. This is among the highest for any car in the country, and the Alto 800 manages a claimed 22.74kmpl. That does clear the picture, giving a fair idea of how much more research and hard work has gone in from Renault’s end in perfecting this small wonder.

With its kind of design, efficiency and space the Kwid truly comes forth as a worthy challenger to the Alto’s coveted crown. What further tilts the scales in Renault’s favour is the spot-on pricing. Now, the car in the pictures here is the fully-loaded variant of the Kwid with all features, while lower variants obviously get lesser features. But despite all its bells and whistles the Kwid RXT (O) costs Rs 3.53 lakh ex-showroom New Delhi, a mere 20,000 rupees more than the top variant of the Alto 800 that retails at Rs 3.33 lakh. Renault’s network may not be anywhere close to Maruti’s reach in terms of sales and service but we believe Renault is in a frenzy to expand the same to strengthen its position in the country. And with an able product like the Kwid the French car maker does have what it takes to unsettle the country’s favourite car.