We drive the highly anticipated Mahindra TUV300 and come out with a mix of emotions about the car. Is it a real competitor for the Ford EcoSport? Well read on to find out. 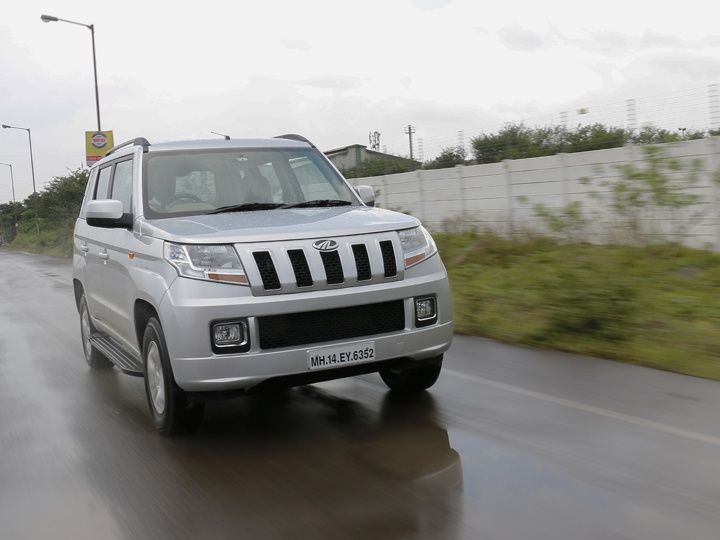 An all new car from Mahindra is always something to look forward to. As one of the largest automotive manufacturers in the country, Mahindra have always put out vehicles that have gone on to be crowd favorites, be it for its macho appeal, history or just sheer road presence. Which is why the new TUV300 is certainly one of the most anticipated vehicles from the UV manufacturer for a long long time. So what is it all about? Well, read on...

The TUV300 is an absolute U-Turn over Mahindra’s usual over the top designs and that is a good thing. Now where some people might not agree with me, the Mahindra TUV300 is one of the better looking cars to have come out of the Mahindra stable in the last few years simply as it is not overly designed and showered with trinketry like the Scorpio or XUV are. In fact, with its squared out design, muscular haunches and pronounced wheel arches the TUV300 is just right when it comes to a car trying to flex its muscles.

The front of course is dominated by a large and in your face multi slat grille that is typically Mahidnra and a set of simple yet well designed headlamps units that go well with the overall design. The rectangular fog lamps too are a welcome addition and tie up the whole ‘macho and manly’ look of the TUV300 really well. The same understated and well designed language continues around the rear too with all the focus going to the large tailgate mounted spare wheel. The vertically stacked tail lamps and the rear bumper are well styled but the rear step sticks out like a sore thumb and should be immediately eliminated.

When viewed from the side the TUV300 continues with the whole straight lines and sharp angles design. The D pillar is blacked out to give the TUV300 an almost floating roof feel. The C-pillar though continues to be in the same body color and breaks the large glasshouse lines really well. We do like the way the wheels have been designed on the TUV but hate the fact that they are puny. The TUV300 we think would look much much better with a set of 17-inch wheels and tyres from the Scorpio or the XUV500. All said and done, we did speak to a lot of people who though the TUV300 looked quite ungainly, but then we guess design preferences change from individual to individual.

Step into the new Mahindra TUV300 and you are greeted with possibly the best interior that we have ever seen in a Mahindra vehicle. There are no daft plum colored plastic and overly designed AC vents to see here, only a really well designed dashboard festooned with a grey and beige combination. The TUV300, like many other cars that have been launched in the last two years uses a gloss black plastic console to house the infotainment system. And a very classy aluminum finished silver plastic that also makes an appearance on the door handles and on the AC vents surrounds the whole setup. The buttons on the console too are very well placed with almost minimal clutter. We particularly like the way the top of the dashboard flows from the instrument cluster to the passenger side in one fluid motion with nothing breaking the lines. The Mahindra design team have certainly done a great job here and all-in-all, the quality of the plastics along with the fit and finish is definitely par expectation.

The Mahindra TUV300 is also surprisingly spacious when it comes to headroom, shoulder room and legroom. The front seats though are a bit too firm and do not feel comfortable over longer distances and could do with a tad bit more padding especially around the lower areas. The rear bench seats too offer good space for three passengers and have enough legroom too but again are not as comfortable and do not offer enough under thigh support. The last row of course could on paper house two adults but we would not recommend using those seats for a longer journey. You also get a host of cubbyholes and bottle holders in the TUV300 along with a large illuminated glove box that makes storing knick-knacks in the TUV300 and fruitful proposition.

The TUV300 comes quite loaded with a decent set of gizmos and gadgets. The top of the line car that we drove comes with a Bluetooth, AUX and USB input infotainment system that offers seamless pairing and iPod support too. You also get reversing sensors which displays relevant information on the centre screen. You also get voice warnings for not wearing your seatbelt and a welcome message when you switch on the TUV300, both of which we think are quite unnecessary and more of a gimmick.

The T8 version also gets a height adjustable drivers seat and of course a height adjustable steering wheel. All in all, compared to the likes of the Ecosport, the TUV300 is pretty much on par. Mahindra though should have thought ahead and added the same touchscreen infotainment system that you get in the Scorpio or the XUV500 to really give the TUV and edge over its competition. You also get a start-stop system and braking regeneration just like you get in the new ‘Hybrid’ Maruti Suzuki Ciaz but the overall effect it has on the TUV300’s fuel economy is not really drastic.

If there was one thing that really disappointed us about the TUV300, it would be the engine. The 1.5-litre engine which has been given the mHawk80 nomenclature comes with a 2-stage turbocharger and makes 85PS of peak power and 230Nm of peak torque. That said, it is difficult to see where all the torque and power is really going as under full throttle acceleration the TUV300 takes forever to get anywhere near three digit speeds. The only saving grace is the fact that if you do get the TUV going, especially in the city, in gear acceleartion if you work the gears well is not bad and it does tend to keep up with faster moving traffic on the highway too.

We are also particularly disappointed with the gearbox. While all the forward gears are pretty easy to find, the reverse gear does seem to get lost in the midst of it all and has a noticeable clashing sensation. We guess the TUV300 gearbox is the same NGT-530R series gearbox that Mahindra uses in some of its other cars and if so, the reverse gear issue is one that has plagued other cars too. But, there is a silver lining. The clutch effort is not as much as say the likes of the Duster and shifting between first-second-third-forth and fifth doesn’t take much effort.

And then there is the NVH level. Someone in the Mahindra research and development team has put in some serious work into making the TUV a much quieter and vibration free car (as compared to the likes of the Scorpio), and for that, he or she certainly deserves a pat on the back. On the whole though, the engine and gearbox department though is certainly one that needs to pull up its socks and make the TUV300’s engine perform a lot better.

Ride and ease of driving  rating_3.5_rating

One of the things that really surprised us is the way the TUV300 handles bad roads. Throw it at a pothole or an undulated section of road and the TUV300 manages to waft over it without much fuss while keeping the occupants quite comfortable. That said, passengers in the rear seat and the last row do feel more jerks than the ones in the first row, but then, that is a typically Mahindra trait.

The TUV300 is an easy car to drive for even the most novice driver due to the fact that it is really east to look out of. There is however a slight blind spot when you reverse and the inside rear view mirror could have been a tad bit larger. Of course, the reverse sensors do aid drivers but the addition of a reverse camera would have been very welcome.

Being a body on frame construction, expecting the TUV300 to handle like a sedan or a family hatchback is asking too much. That said, we were pleasantly surprised by how this new setup makes the TUV300 roll much less than the likes of the Quanto for example. The TUV300 also feels quite comfortable and planted at higher speeds. There is of course a noticeable level of body roll when you chuck it into a corner hard or when you take a high speed sweeping corner but nothing that might make it uncomfortable. The TUV300 comes with disc brakes in the front and drum brakes in the rear and while other Mahindra cars do seem a little nervous under heavy braking, the TUV300 manages to hold its own thanks to the ABS and EBD that it gets.

With prices (ex-showroom, Pune) starting at Rs 6.90 lakhs for the base variant, Rs 7.55 lakhs for the mid variant and Rs 8.40 lakhs for the one that we are driving here today, the TUV300 does make a lot of sense if someone wants to upgrade from a smaller hatchback to something bigger. When it comes to fuel economy, Mahindra claims that the TUV300 gets an ARAI score of 18.49kmpl. In the real world though expect a figure that is slightly less, mainly due to the fact that the TUV300 needs to be kept in the correct rev range to make it to get a move along.

The Mahindra TUV300 is a refreshingly good product from Mahindra with appealing looks, a very well made interior that is also well designed. It is spacious, doesn’t cost the earth and has a pretty good ride and handling package too. If only the TUV300’s engine was more powerful and more responsive, it would have been an even more potent vehicle than it is today. That said, we are sure that the TUV300 will be a runaway success for Mahindra as most of its customers do not really care how powerful it is and are more wooed by how nice this compact SUV actually looks on the outside and insides and of course, how fuel efficent it is.

What is important to note here though is the fact that the TUV300 will not only take on the likes of the Ford Ecosport but also the likes of the premium hatchbacks like the Hyundai i20 and the Honda Jazz along with compact sedans like the Ford Aspire and the best selling Maruti Suzuki Swift Dzire, and that is when its value for money quotient will really make sense.