The Mahindra Gusto gets a change of heart with a new 125cc powerplant. We take a short spin around picturesque Lavasa on the new Mahindra Gusto 125 automatic scooter 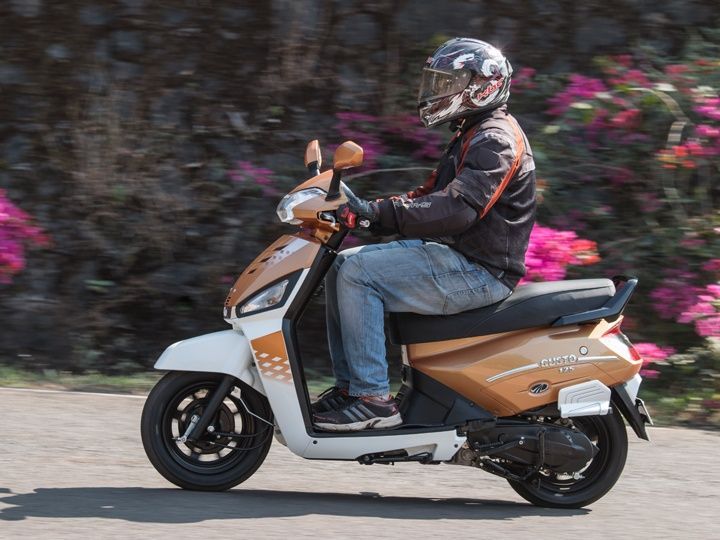 Ever since the Mahindra Gusto was launched in the Indian market we knew that Mahindra Two Wheelers wouldn’t restrict themselves to just one scooter as they had developed a new platform and powerplant. There were many rumours that Mahindra would launch a female oriented variant of the Gusto while we predicted that a 125cc scooter is on its way. And our guess turned correct as Mahindra revealed the new Gusto 125. With the new offering, Mahindra wants to make a mark in the fast growing 125cc scooter segment as despite being a feature rich offering, the Mahindra Gusto has failed to garner impressive sales figure in the highly competitive 110cc segment. With the new Gusto 125, the automotive giant feels that it has the right product for consumers in the hunt for a 125cc scooter. We take a short spin of the new Gusto 125 to find out whether it does justice to Mahindra’s claim.

Talking about styling, the new Mahindra Gusto 125 looks very much like its 110cc sibling. The basic silhouette of both the scooters is identical which is disappointing in our opinion as we would have preferred a different looking scooter. The only visual change is the new front apron which has been redesigned and we must say it does look better than the standard scooter. Also our scooter was draped in a dual-tone shade with new graphics while the muffler on the Gusto 125 gets a chrome heat shield.

Overall styling of the scooter could have been better but the new bright dual-tone shade should help the Mahindra Gusto 125 stand out from the crowd. The analogue instrument cluster has been carried forward which houses a speedometer, odometer, fuel gauge and various telltale lights. The cluster is easy to read on the go but we would have liked to see a digital console though. Switch gear quality is satisfactorily while the plastic quality and paint finish need improvement. It also gets bar end damper which is a segment first but the chrome finish on them is a bit of an overkill. The Gusto 125 carries forward all the list of features as seen on its 110cc sibling. This includes height adjustable seat, remote flip key and LED pilot lamps. Under seat storage is though poor as we couldn’t fit our full face helmet.

Riding posture is similar to any to any other scooter which is upright and comfortable but we found the cushioning of the seats a bit too soft. Pillion comfort is good as the long and wide seats means the pillion rider has lot of room and the chunky grab handle is easy to hold. Powering the new Gusto 125 is a new 125cc M-TEC powerplant indigenously developed by Mahindra. The air-cooled, single-cylinder motor pushes out 8.7PS of power and 10Nm of peak torque which is on par to the segment benchmark – Honda Activa 125. But real world performance of the Mahindra Gusto 125 is disappointing as acceleration isn’t brisk as one expects from a 125cc powerplant. The scooter does have a strong mid-range which means one can hold speeds around 70kmph without much effort. Refinement level of the motor is impressive as hardly any vibes were felt even when the scooter was pushed to its limit. Fuel efficiency figures hasn’t been divulged but we expect the Gusto 125 to have an overall mileage of around 40-45kmpl in real world conditions.

High speed stability of the scooter is good owing to the large 12-inch diameter wheels running on tubeless tyres. The scooter weighs 123kg as opposed to the Honda Activa’s 125 is 110kg and this we see as the primary reason for the poor performance. The added weight also means that female buyers wouldn’t be too keen on purchasing the Gusto 125 as they prefer a lighter scooter. Handling of the scooter is fine but it does feel a bit rear heavy which I personally like but it isn’t the most nimble of the scooters on sale and again the extra weight is the culprit in restricting its handling dynamics.

It employs telescopic front forks and a monoshock unit at the back. The ride quality offered by the scooter is plush as it swallowed bumps, potholes and everything we threw at it without any fuss and it definitely is the standout feature for the Gusto 125. The 165mm ground clearance is the highest in the segment and even with a pillion we didn’t scrap the under body even once. Braking is done by drum brakes at both ends and though the bite provided by them was satisfactorily we would have favoured a disc brake option (planned as an update).

Pricing will be a key factor for the Mahindra Gusto 125 and it will have to undercut its competitors to compete against. Mahindra officials claim that they will price the scooter competitively, whether this happens or not is something we shall find out at the 2016 Auto Expo where it will be launched. As a product, we don’t think the Mahindra Gusto 125 is the best 125cc scooter option in the market as it does have a few rough edges in terms of dynamics and not to forget the weight. Having said that, consumers do have a positive opinion about Mahindra offerings because they associate Mahindra brand with SUVs and tractors and the name spells rugged built and easy maintenance. But if you want a feature rich scooter with great ride quality, only then does the Mahindra Gusto 125 makes sense.