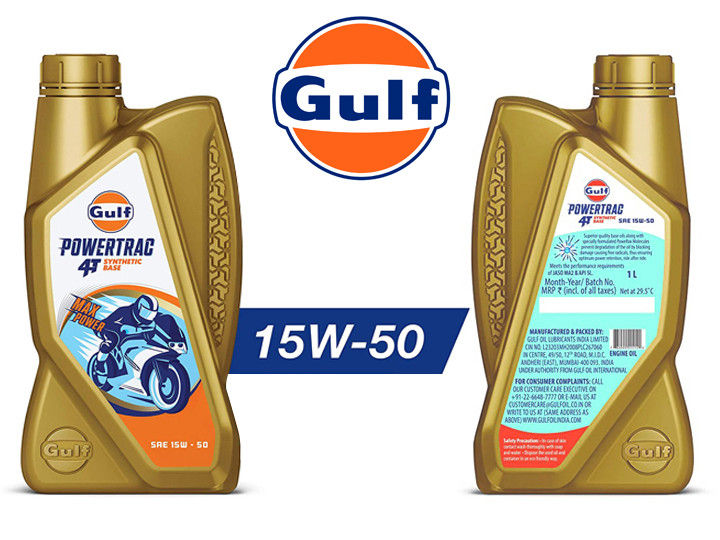 Admittedly, this is quite different from what we usually do. Reviewing an engine oil is a first for me at least, so I’m curious to see how this pans out. There are a number of synthetic motorcycle engine oils available in the market designed specifically for performance motorcycles, and the PowerTrac 4T 15W-50 is one of the newest. I’ve been using the Motul 7100 4T 10W50 until now for my 2013 KTM 390 Duke. While it works well I’ve always wanted to experiment with different synthetic oils from Amsoil, Mobil 1, Shell and Liqui Moly to see how they perform under different riding conditions. And do they actually have an impact on refinement and performance? Unfortunately, I just haven’t brought myself to do it until now.

So who’s it meant for?

Gulf terms the PowerTrac 4T as a premium 4-stroke engine oil specifically designed for performance-oriented air- or liquid-cooled engines. In other words, bikes with engine capacity of 180cc and above. So you could just as easily use this oil on a Kawasaki Ninja 300, XPulse 200, Classic 350 or even Yamaha R 15’s. Although, we’d suggest you have a look at your bike’s user manual first to check which oil is recommended for your vehicle.

What does it bring to the table?

You have a number of oil options to choose from, so what works in favour of the PowerTrac 4T? According to Gulf, the PowerTrac 4T is designed to minimize sludge build-up and even reduce oil thickening, thereby facilitating extended oil life. It claims to protect vital engine and gear components, which results in less maintenance costs.

Here’s where things get interesting. Gulf says the PowerTrac’s controlled frictional eliminates clutch slippage, increases power by up to 7 percent, along with improved fuel efficiency and drivability. It’ll be interesting to see if the oil actually lives up to its claims. I mean a smoother running 390 with better fuel-efficiency should be quite impressive, right?

The oil also enables easy start ups in those cold winter mornings and even ensures effective lubrication and wear protection. Since winter is just setting in, it couldn't have come at a better time.

At Rs 440 a litre, Gulf PowerTrac 4T is quite reasonably priced. What remains to be answered is how it performs in the real world. This involves putting it and the engine through chaotic city traffic with varying temperatures, evaluating long distance durability, engine temperatures, and oil viscosity. The next couple of months and hopefully a good number of kilometres on the odo should paint a better picture. Until then stay tuned to ZigWheels.