Will the tailored-for-India Nissan Kicks manage to steal some of the Creta’s thunder?

When we drove the international version of the Nissan Kicks in Dubai we came back pleased. Today, the Indian version gives us a warm fuzzy feeling but that’s more to do with its shared underpinnings with its stablemates (the Duster, Terrano and Captur) rather than lingering thoughts from that roll in the sand. That’s not to say that it’s not been improved upon though. 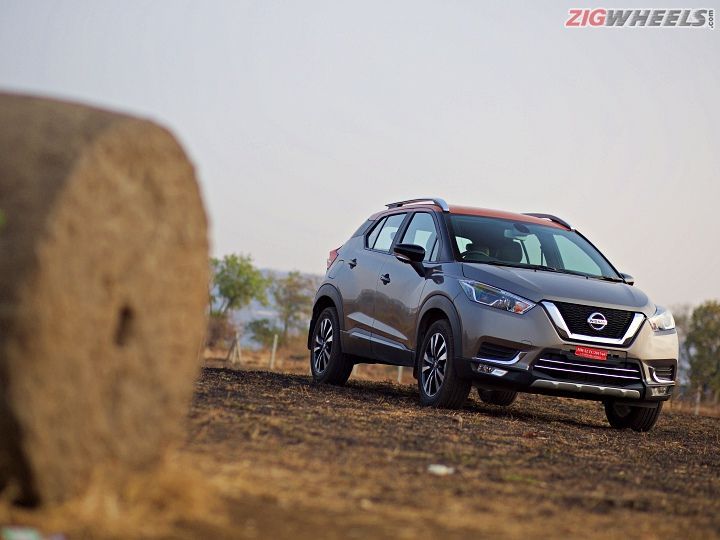 But that’s a little hard to tell when you first see it in the flesh. Up front the Kicks looks quite the part with a large grill, LED position lamps and LED projector headlamps and a re-designed bumper when compared to the car we saw in Dubai. The bumper also houses new cornering fog lamps that are only available in this top end XV Premium Option variant.

But it’s when it’s viewed from the side that you notice that the Indian Kicks is slightly larger than its international counterpart. Nissan has done its best to give the Kicks a more boxy SUV look that customers seem to pine for.

But it still has some rounded edges to the bonnet line and that sharply raked rear windscreen doesn’t help either. We do like the floating roof effect in the C-pillar and the new functional roof rails for adding some more SUVish mojo. Another nice touch are the 17-inch machined alloy wheels that are available in all but the entry level XL variant.

The other Renault/Nissan offerings based on the B0 platform have struggled to offer that premium experience that Indian customers have longed for but the Kicks wants to change that. Step inside and you are greeted with pleasingly upmarket looking interiors.

There are some misses though. We wish the plastic parts that are leather-wrapped, like the dashboard and the door trim, had some kind of foam backing as well. Because even though they’re soft to touch they aren’t quite cushiony. While this sounds like a bit of a nitpick, it’s small touches like this that would have added to that luxury feeling that the Kicks is trying to bring to the segment.

Another annoyance is the driver’s seat which may be adjustable for height but for tall drivers it’s already high in even its lowest setting. Taller drivers won’t be comfortable and may even find their visibility compromised to some extent, especially when using the sunshade, much like it is in the Captur.

For being larger on the outside than the international spec SUV, the boot space has shrunk for some reason. It measures 400 litres now as compared to the 432-litre one we saw in Dubai. The version of the Kicks also got 60-40 split seats in the rear and this would certainly have added to its utility factor. As far as passenger space is concerned, the Kicks sports enough knee and leg room to sit full-sized adults in the rear. Three is also a possibility that your centre passenger would have to deal with the fold-down armrest as a cushion and a non-adjustable headrest.

Tech it up
Up front is the new 8-inch touchscreen that features Android Auto and Apple CarPlay, standard in all but the base XL variant. Another one of the added premium features and a segment-first is the new 360 degree camera.

This a big help when parking and the interface is nicely designed but we wish the resolution of the cameras was better. As it stands, the 360-degree view works reasonably well but the larger (magnified) images are very grainy. Another wow feature is mood lighting that can be controlled via an app.

The international Kicks features cruise and audio controls mounted on the steering and these felt a little better executed than this split solution. One nice surprise is the horn. It’s a trumpet style air horn and announces the arrival of the Kicks quite distinctively.

More familiarity
Starting up the Kicks stirs more memories as the H9K jumps to life with its signature small shudder, but at idle the engine note sound a little softer on account of the better sound deadening in the Kicks. The numbers are identical to the rest of the B0 family - a 1.5-litre turbo diesel making 110PS@3850rpm and 240Nm@1720rpm. Drive runs to the front wheel via a six-speed manual transmission. Sadly there are no automatics on offer at the moment and this is a bit of a miss in our books, especially when Nissan is positioning the Kicks against the Creta, which features automatics in both diesel and petrol variants.

As far as the numbers go, the Kicks manages the sprint to 100kmph in 12.81 seconds and braking from the same speed is accomplished in 39.20 metres. In our fuel efficiency test the Kicks managed to return 20.79kmpl on the highway and 15.18kmpl in the city (Hyundai Creta: 21.84kmpl highway, 13.99kmpl city). This was achieved in eco mode, which is only available in the diesel variant. This dulls down throttle response and improves fuel efficiency as advertised. In comparison, with the eco mode off we only managed 13.68kmpl in the city.

Driving in the city can be a head nodding experience as the turbo only starts to kick in strongly at a slightly high 1700rpm, so you have to be gentle with the throttle (or drive around in eco mode). The other niggle in the city is the clutch which feels slightly softer sprung now, but long stints in traffic will still give your leg muscles a workout. Out on the highway the Kicks is at home where the 6-speed gearbox and strong power surge from the engine allows you to make brisk progress. The Kicks handles corners predictably but you can’t really call it sporty, and around long bumpy sweepers another reminder is felt from the steering wheel. Yes, the kickback from the ‘old-school’ hydraulic steering rack is still present.

One of the stand out qualities of the B0 platform was the excellent ride quality that it lent its vehicles. But Nissan has managed to improve on this even further. The setup appears to be just a tad softer and so while bigger bumps and potholes are still dispatched without a care, the smaller bumps, like road imperfections and expansions gaps which used to jar the cabin, are now rounded off a lot better. Kudos to Nissan for improving on one of their strengths!

Verdict
So Nissan has lived up to its promise. The tweaked-for-India Kicks is an improvement on the international version, being both larger and better equipped. The materials and feature set is a bold tick to that premium box even though the lack of an automatic is a strange omission. It does have a few other small niggles, like the blanked out steering controls and the missing 60-40 split for the rear bench but it makes up for this with good highway driveability and excellent ride quality.

Another thing the Kicks has going for it is its packaging, with a number of features including climate control, 17-inch alloys and the 8-inch touchscreen available from the XV variant (one variant above base). Prices start at Rs 9.55 lakh for the base XL petrol variant, going up to Rs 14.65 lakh for this top-end XV Premium Option variant. Nissan has just announced a 3 year warranty, a 3 year roadside assistance package and a 3 year service maintenance package at no extra cost for the first 10,000 customers and thereafter at a nominal fee. Taking all this into consideration, the Nissan Kicks could prove to be an exciting alternative in the compact crossover arena.

Update: Nissan has rejigged the variants of the diesel-powered Kicks. A new base XE variant has been added, while the top-end XV Premium Option variant has been removed. The diesel variants are now priced from Rs 9.89 lakh to Rs 13.69 lakh, as compared to the earlier 10.85 lakh to Rs 14.65 lakh - this should give Nissan a better shot at taking on the competition including the Hyundai Creta, Maruti Suzuki S-Cross and Renault Duster.

Nissan Kicks Gets A New Base Diesel Variant