Hyundai Grand i10 has received a mid-life update which gives it cosmetic and mechanical changes. Have these worked in its favour? Let's find out. 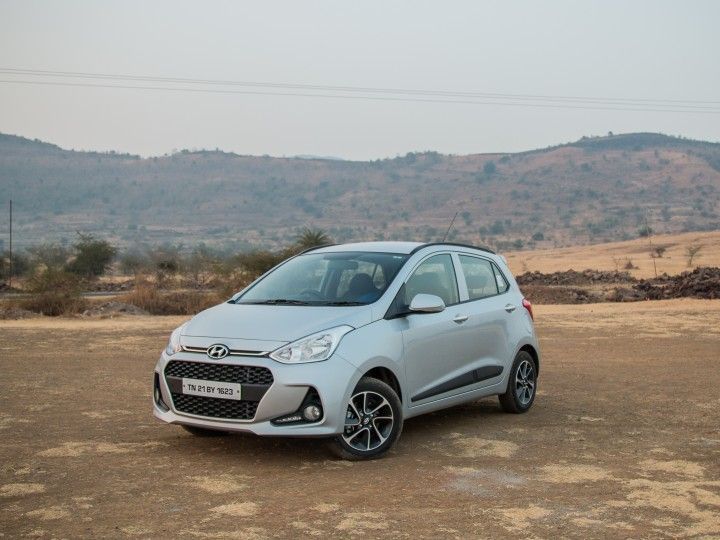 When Hyundai showcased the facelift of the Euro-spec Grand i10 in August last year, I wondered how much of that car will be carried forward to India. I really wanted to see the circular DRLs and the large touchscreen make its way here, but then one out of two isn’t so bad. As an added bonus, we even got an updated 1.2-litre diesel engine which looks promising especially since its competitors such as the Ignis have upped the game.

So, when the Grand i10 facelift was launched here earlier this month, some questions started to bug me. Now that I get my hands on the top-of-the-line Asta diesel, I try to answer them one by one.

Is the Grand i10 facelift better to look at?

First of all, the Hyundai Grand i10 was never a beautiful car to begin with. The focus has been on functionality rather than appearances. That said, the car looks sober and appeals to a wider audience, without trying to impress a niche customer base like the Ignis does.

In the 2017 facelift, the Grand i10 gets a new front look which freshens up the design. The headlamps and the upper part of the grille remain almost identical. The changes begin in the bumper with the hexagonal grille being slightly more angular and in line with Hyundai's new 'cascading' theme. The boomerang shaped fog lamp housing looks sleek and gets air ducts on the top (which lets air cut through the bumpers and reduce turbulence and wind noise), foglamp in the middle and horizontal LED daytime running lamps at the bottom. The DRLs look like an afterthought, and we wish the circular DRLs that the Euro-spec car gets were on offer. The changes make the Grand i10 look a tad-bit more sporty and smarter than the older car.

The side profile of the car remains identical to the older generation, apart from the new 14-inch diamond-cut alloy wheels (available on the Sports (O) and Asta variant only) which give it some more attitude. The rear also gets a new bumper with a big black plastic panel running through the width of the car. Aesthetically, I think it makes the Grand i10 look a little bland and the round reflectors which look slightly out of sync with the rest of the design.

Have the design changes worked?

Yes, the car looks better from the front and the DRLs give it just the right amount of modern flair. The new alloys also add to the flavour and make the hatchback look sporty. Rear is the only questionable profile where the new look could put off a few buyers.

What's new inside the car?

If you have been inside the Grand i10 before, it is going to be a familiar affair. The dual-tone dashboard and steering remain largely identical to the previous model, but with subtle updates. The seats have the right amount of cushioning and contour to keep you tucked in. The height of the driver seat can also be adjusted, which paired with the tilt adjustable steering lets you get into your preferred driving position.

The centre console now features a 7.0-inch touchscreen infotainment system which supports voice recognition, MirrorLink, Android Auto and Apple CarPlay, and doubles up as the display for the new rear camera. The touch feedback and the UI experience is excellent and pairing the smartphone is as easy as it gets. The four-speaker output sounds good for a car this size though it isn’t as good as the 8-speaker Harman unit on the Tiago.

On the other hand, the Sport variant has a 5.0-inch touchscreen system which only gets Bluetooth, Aux and USB connectivity. The two base variants are deprived of any form of music systems which feels a little too harsh.

Hyundai have also added automatic climate control to the Grand i10’s feature list, which was absent in the older model. However, this is present only on the top variant and largely helps in the 'comfort and convenience department'. That said, the air-conditioning is effective, and the car still has rear AC vents which are a big advantage in the hot Indian summers.

The steering wheel remains the same old three-spoke unit. The leather cover continues to offer good grip and the addition of a voice recognition button adds to its practicality. Speaking of which, the car continues to feature power outlets at both front and rear to charge your phones and all four doors get power windows with one-touch functionality for the driver.

Other than these changes, everything else remains the same and the car continues to boast the good overall build quality with good quality plastics and seats of its predecessor.

How many friends can I seat?

Space in the Grand i10 is 'grand' enough for five people. Anything more than that will cause involuntary touching. The knee and legroom on offer at the rear is good enough even for a 6-footer. Sitting three abreast will cause shoulders to rub but not intrude personal space. Open the fifth door and you get a best-in-class 256-litre luggage compartment. The rear bench folds to increase the boot space but there is no option of split folding which takes away from its practicality.

The Hyundai Grand i10 facelift gets an updated diesel engine. Why?

The older model of the Hyundai Grand i10 had only a few chinks in its armour, one of which was the underpowered 1.1-litre diesel. The bigger U2 1.2-litre CRDi diesel engine is based on the same 3-cylinder unit, but messing with the bore and stroke size has increased the engine capacity. As a result, the car now makes 75PS of peak power at 4,000rpm and 190Nm of peak torque at 1,750 to 2,250rpm. These figures are 4PS and 30Nm more than the older model. As this additional torque is available from as low as 1,750rpm, the hatchback gets off the line with a punch and continues to pull up till the 4,000rpm mark. After that, the motor feels breathless and begs you to upshift.

We did our own test on the Hyundai Grand i10 U2 1.2-litre CRDi Asta and the results are as follows.

Is it any better to drive?

Yes, the car is quicker off the line with a stronger pull. In city driving, this will be a boon and the torquey motor will allow you to have some fun without downshifting to often. But at high speeds, especially after the 4,000 rpm mark, the engine makes a lot of noise and very little power. On highways, going past the 130kmph mark will take some time and willpower. The 5-speed gearbox offers decent shifts with slightly long throws. The clutch is very light and the gearbox also works well enough to add to the driving experience.

How about handling and ride quality, has it improved?

The Grand i10 has a beautiful suspension setup which lets you carry some speed into corners while remaining soft enough to tackle everyday broken roads. The cabin feels quiet and shields the occupants from the road, wind and engine noise well. But, go over an undulation fast and the thump will be audible. Vibration levels are well under control on the move, but the NVH levels rise prominently beyond the 3,500 mark with the rpm needle. Also, it does vibrate quite a lot every time you switch the car off, which can get annoying.

The steering feedback remains shallow for sporty driving but more than adequate for city manoeuvrability. The effort required to make a u-turn or to park the car in a tight spot is minimal.

Overall, the handling and ride have remained the same. However, the in-cabin experience has improved a notch.

What about the Grand i10 facelift’s safety features?

The Grand i10 facelift gets a driver airbag as standard. The co-driver airbag is available in the top three variants whereas ABS is limited to the top-end variant only. To put things into perspective, the Maruti Ignis gets dual-front airbags and ABS with EBD as standard in all variants. A little more effort in the safety of lower variants by Hyundai would have been appreciated.

Has Hyundai managed to improve the Grand i10?

The facelifted Grand i10 looks better, has better features and is better to drive thanks to the new diesel engine that puts it on par with its rivals. Pair this to the improved cabin insulation, and the Grand i10 gets our thumbs up. But, with prices starting from Rs 4.58 lakh for the petrol and Rs 5.68 lakh (ex-showroom, Delhi) for the diesel, the lack of equipment in lower variants will force you to write a bigger cheque. Nonetheless, the updated Hyundai Grand i10 diesel is a well-rounded package and will continue to give cars like the Ford Figo, Mahindra KUV100 and the Maruti Ignis a run for their money. More importantly, the Hyundai is now better-equipped to take on its biggest rival - the Maruti Swift, till the new generation gets here later this year.