Can the Japanese off-road machine stand up against our desi terrain tamer on paper? 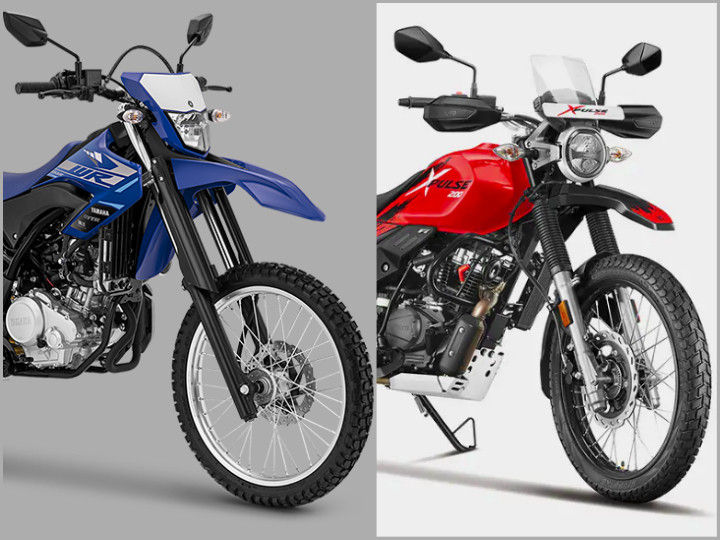 The Yamaha R15 V3.0’s engine has been versatile enough for Yamaha to plonk it on a dual-purpose bike, the WR 155 R. The best bit is that this motorcycle could head to our shores in the near future. So how does it compare against our dirt tamer, the Hero XPulse 200 on paper? Let’s find out.

The Yamaha WR155R certainly packs a much more advanced engine, complete with VVA technology. This wizardry helps in maintaining a balance between low-end grunt and top-end drive. On the other hand, thanks to its sheer displacement, the Hero XPulse 200 is more powerful and torquier than the Jap. But on the flip side, the WR155R’s light kerb weight of just 134kg should make it feel sprightlier than the 157kg (kerb) Hero XPulse 200.

The Yamaha WR 155 R sports a fatter front fork, which should ensure more directional stability compared to a slimmer fork like the XPulse 200. Having a fatter fork should also help in taking the shocks in a more composed manner. That said, it really depends on how the fork is tuned, so the real-world behaviour might be different. While Yamaha has not mentioned the suspension travel on both ends, going by the pictures, it seems to be ample enough for most of your off-road fun.

Since the Yamaha is lighter, it makes do with a smaller front disc. There’s no ABS so experienced riders can happily have some slideways fun. On the other hand, the Hero XPulse 200 gets a single-channel ABS which cannot be turned off. While both the bikes have similar rim sizes, the XPulse packs dual-purpose tyres whereas the Yamaha WR 155 R rides on proper knobbies, which should give it better grip off the road, but at the expense of on-road dynamics.

Thanks to the larger ground clearance, the Yamaha WR 155 R seems to be a lot more off-road capable than the Hero XPulse 200. Also, the 20mm extra long wheelbase should offer it a bit more straight line stability. Even though it has a distinct dual-purpose-like slim seat, at 880mm, the seat is a bit too tall for average Indian riders. This is where the XPulse 200’s seat height seems to be a bit more manageable. It should also offer a much better range thanks to the 4.9-litre larger fuel tank compared to the Yamaha WR 155 R.

As far as the feature list is concerned, the WR 155 R packs a fully digital instrument cluster which shows details like average fuel consumption, gear position indicator, time, and hazard lamp function. It packs a halogen headlamp and an LED tail lamp, whereas the indicators are bulbs. The Hero XPulse 200 gets a full-LED headlamp, LED tail lamp, bulb-type indicators, full-LCD instrument cluster with smartphone connectivity and even turn-by-turn navigation.

Expect Hero MotoCorp to officially launch the bike once the coronavirus lockdown restrictions are relaxed further and things are somewhat back to normal. All in all, the Yamaha WR 155 R should serve as an excellent hardcore off-roader whereas the Hero XPulse 200 exudes a bit more practicality while being capable enough on its own off the road.