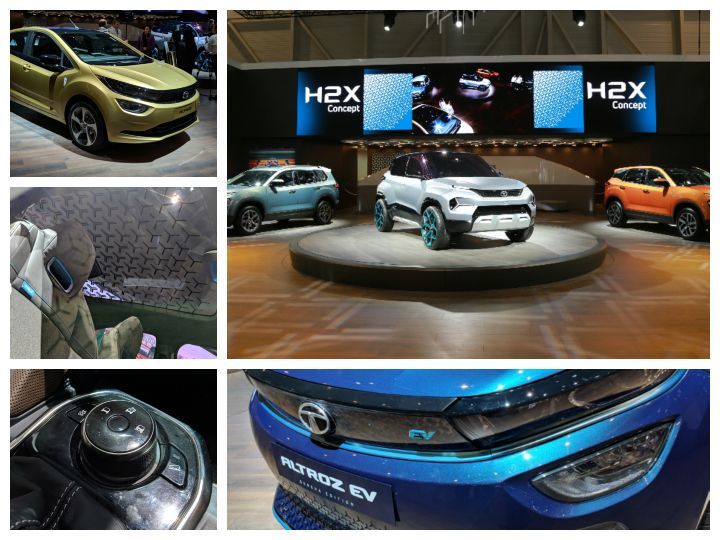 Tata’s hall at the 2019 Geneva Motor Show was as much about its near-future vehicle lineup as it was about some unique features and characteristics these vehicles would get. While we have extensively covered the individual vehicles -- the Altroz hatchback and its EV counterpart, the Buzzard 7-seater SUV and the H2X micro-SUV concept -- here’re five more things we can expect from Tata in the very near future.

Tata’s upcoming flagship 7-seater SUV, the Buzzard, had a positive buzz around it. The company announced a new 1.6-litre, 4-cylinder turbo-petrol engine which will be BSVI-ready and is expected to take over from the 2.0-litre diesel engine as the mainstay of the range. The same engine is also expected to make its way to the smaller Harrier, but in a detuned state - details of performance numbers of the petrol engine in the Harrier are not known.

Based on the Omega platform, which shares a major chunk of its design with the Land Rover D8 platform, both the Harrier and the Buzzard are 4x4 ready. While the Harrier is currently only available as a front-wheel-drive SUV, Tata has announced it will add a 4x4 powertrain to the lineup by end 2020. SUVs and 4x4 drivetrains are almost synonymous, but a higher initial cost has always deterred most people from going in for them. Will this tendency change by 2020? We will have to wait and watch.

2) Warm hatch from the get-go

Tata officials promised us that the Altroz will be a fun-to-drive car anyway, with the suspension set for good handling characteristics from the get-go.

How do you tackle the increasing demand for sunroofs, the need to design a 5-star crash-rated vehicle and save weight at the same time? The answer may lie in the Tata H2X concept shown as the 2019 Geneva Motor Show by Tata Motors. The full glass roof gives any vehicle a more airy feeling while not increasing the overall weight because of the added structural supports to compensate for a large chunk of the missing roof.

Sure, it may not be as ‘fancy’ as a sunroof but it does reduce costs all around. A glass roof may also stop people from risking their lives while not removing that ‘freedom’-like feeling.

The Tata H2X Concept featured large single-piece digital screen. Pratap Bose - Vice President, Global Design, Tata Motor Group - did mention in our exclusive H2X walkaround video that screens like these are becoming quite the norm in the industry. Could this point to the fact that Tata is considering adding such large screens to its products in the future. The Altroz EV could be one of the first products to feature this layout sometime in 2020, followed by the production version of the H2X.

Tata has a lot of experience now developing and manufacturing EVs in India. While the Tigor EV may not be sold commercially because of price and range concerns, the Altroz EV could begin the electric revolution for Tata in India. Tata has about a year to set up charging infrastructure or collaborate with other manufacturers, the central, state and local governments to set up the same.

In the meantime, Tata has its platform ready to accept electrification. Both the OMEGA and the ALFA platform have been designed keeping in mind the need for electrification in the future. The first EV from Tata will be the Altroz, expected to be launched by end-2020 with a real-world range of ‘over’ 300km per charge according to Tata. The H2X could also spawn an electric SUV, and so could the Harrier - helping Tata capitalise on the demand for electric vehicles in a world which is slowly but surely shunning ICE (internal combustion engine) powered vehicles.