A couple of launches, launch announcements as well as a crash test safety rating made headlines this week 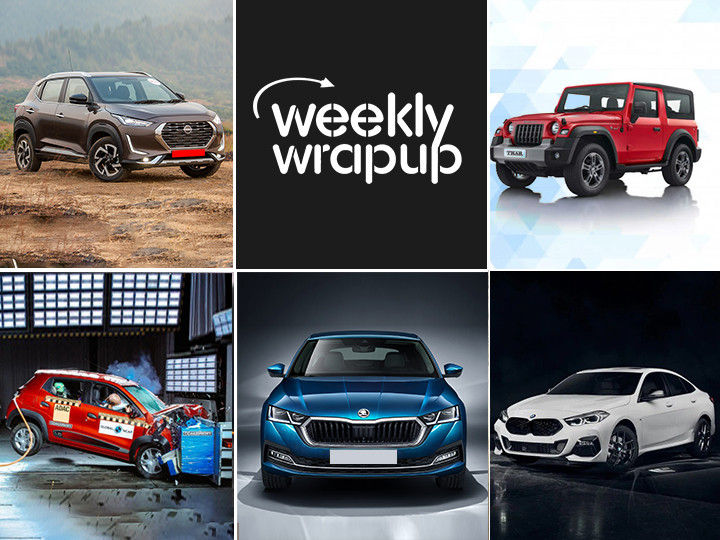 As we head into the final month of 2020, carmakers are beginning to shift focus towards next year. That said, this week did see a couple of car launches, some future announcements and a budget hatchback going through Global NCAP safety tests. Here’s more about them:

Nissan has finally launched the long anticipated Magnite in India at introductory prices ranging from Rs 4.99 lakh to Rs 9.35 lakh (ex-showroom). Offered in five variants, with two petrol engines and a boatload of features, the Magnite could make a strong case in the uber competitive sub-4-metre segment. To know more, head here.

Mahindra Thar Set To Get Pricier

The final month of 2020 will see Mahindra giving the next-gen Thar a price hike. While it isn’t clear how much is the price hike or when does the price hike take effect, the premium could be upto Rs 50,000. That said, existing customers who’ve already booked their Thar until November 30 don’t have cause for concern, which you can read more about here.

In barely a month since the launch of the BMW 2 Series Gran Coupe in India, the Bavarian brand has added a limited-run Black Shadow Edition to the entry-level sedan’s lineup. Based on the top-spec 220d M Sport variant, it gets some M Performance parts as well as blacked-out cosmetic tweaks. To know more about the premium it carries over the 220d M Sport and when bookings will commence, head here.

It was already a bummer that the launch timeline of the fourth-generation Skoda Octavia was pushed from September 2020 to Q1 2021. Unfortunately, those who’ve had their eyes on the next-gen Octavia will have to wait a little longer as Skoda’s Director of Sales and Marketing, Zac Hollis has announced a further delay. To know the new launch timeline head here.

The Maruti Suzuki S-Presso has not had a good couple of weeks after faring poorly in the Global NCAP crash tests. Well, the news doesn’t get better as its arch-rival, the facelifted Renaut Kwid, has scored a better safety rating. For more information on the Kwid’s safety rating, head here: