Here’s a quick compilation of all the headlines this week 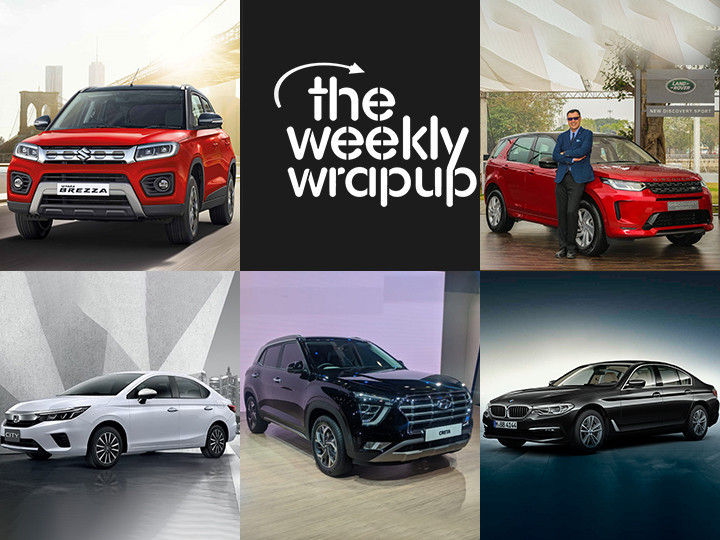 The last seven days saw two major launches starting with the new Land Rover Discovery Sport, followed by the new entry-level BMW 530i. Meanwhile, we also found out when the much-awaited 2020 Vitara Brezza with a petrol BS6 engine, Hyundai Creta and the Honda City are launching in India. Last but not the least, the India-bound Hyundai Verna was revealed in Russia, giving us an idea of what to expect.

Maruti Suzuki has finally revelaed that the updated Vitara Brezza will be launched by Mid-February. It now comes with the sole option of a BS6 1.5-litre petrol engine. This engine will also feature a 12V mild-hybrid system and comes paired with either a 5-speed manual or a 4-speed automatic. The sub-4m SUV will also undergone a slight cosmetic overhaul with a new grille, headlights, and bumpers. It is likely to be priced in the same range as the current diesel-only version.

Land Rover has driven in the 2020 iteration of the Discovery Sport which now features a new platform, BS6 powertrain options, and slight cosmetic tweaks. The engines in question are a 2.0-litre BS6 diesel (180PS/430Nm) and petrol (249PS/365Nm) units. The latter is also equipped with a mild-hybrid system for added efficiency.  Priced from Rs 57.06 lakh, the Disco Sport comes in two variants: S and R-Dynamic SE.

BMW has launched a new entry-level 530i Sport variant for the 5 Series, bringing its price down by Rs 5 lakh! The new variant is a win-win as it gets the same 2.0-litre turbo petrol as the M Sport that puts out 252PS. What’s more interesting is that it gets all the safety kit although it misses out on some features, the details of which can be found here.

Yes, Hyundai is set to launch the 2020 Creta on March 17. The SUV was unveiled at Auto Expo 2020. Although Hyundai didn't reveal the cabin at the event, we got a sneak peek. Based on the same platform as the Seltos, the Creta packs the same BS6 engines with the same output figures as the Kia. It will also feature Hyundai BlueLink connected car features and a sunroof. More deets this way.

2020 Honda City To Launch Next Month

The new Honda City is all set for a launch on March 16. The sedan gets a major exterior and interior overhaul to take on its arch rivals. The 1.5-litre petrol and diesel engines are expected to be retained with BS6 updates. We already know what the City will look like thanks to its Thai cousin. But the wait isn't that long until we see the new-gen Honda City for India.

Hyundai revealed the 2020 Verna in Russia, which goes by the name Solaris. We expect the India-bound Verna to borrow styling cues from the Solaris. Under the hood will be two petrol engines: a 1.4-litre unit and 1.6-litre motor. The oil burner of choice could be the 1.5-litre diesel engine from the Seltos.