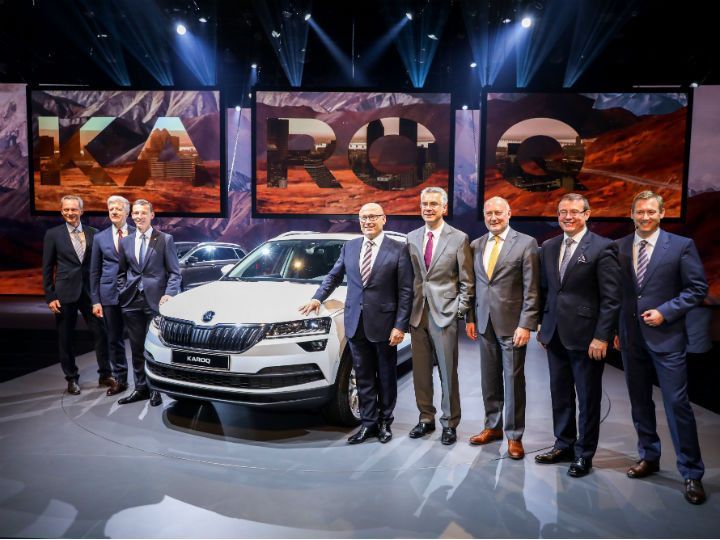 As previously reported by ZigWheels, Skoda has finally showcased the Karoq in Stockholm, Sweden. The unveiling comes after the Czech carmaker released a couple of teaser images to keep the international automotive community engaged as we get closer to the official reveal.

Skoda has derived the name from a native Alaskan language, and it translates into two words: car and arrow. The Karoq follows Skoda's new design language, and, just as its name suggests, it appears sharp from every angle. The Karoq doesn’t look like a hatchback on steroids the way the Yeti did.

The Karoq measures 4382mm in length, 1841mm in width and stands 1605mm tall with axles separated by 2638mm. That's a growth of 160mm, 48mm and 60mm in length, width and wheelbase, respectively, and a drop of 86mm in height. There's no word on the ground clearance yet as it is expected to vary from country to country based on consumer preference and road conditions. Considering our love for cars with higher ground clearance, we can safely say that it should be in the ballpark of 200mm for us to even qualify it as an SUV. The boot space measures 521-litres; better than the Yeti's 416-litre compartment.

Details about the interior design remain scarce, with only a slide or two showing the insides. Be prepared to sit through a few teasers in the coming months before you get to see its interiors. Skoda, however, did talk about the features pertaining to the SUV's cabin. Android Auto and Apple CarPlay will be standard while certain variants will also get wireless phone charging capability and an inbuilt LTE connectivity to furnish info from the Internet while serving as a wireless HotSpot for the occupants.

Driver assistance systems planned for the Karoq include automatic parking, lane keep assist, traffic jam assist, blind spot warning and pedestrian detection. While most of these are reserved for countries with compatible infrastructure, one feature that makes the most sense for Indians is the traffic jam assist. It can keep the car rolling as the traffic in front moves while maintaining its lane and a safe distance in tight traffic situations. It allows the driver to relax even when stuck in bumper-to-bumper traffic.

Powertrain options for the Karoq will range from a 1.0-litre, turbocharged petrol engine with 115PS to a 2.0-litre, turbocharged diesel engine with 190PS. The 2.0-litre TDI will be available with the 7-speed dual clutch transmission, 4WD and multiple driving modes as standard. A 6-speed manual will be offered as an option with the rest of the powertrains, including the new 1.5-litre TSI engine.The new turbo-petrol engine also has a trick up its sleeve for low-stress circumstances. Thanks to the magic of direct injection, engineers have been able to enable cylinder deactivation, which makes it easier to achieve higher mileage figures by shutting off fuel supply to two of the four cylinders.

As of now, possible engine options for the India-spec Karoq remain a mystery, but, we have our bets on the 1.5-litre TSI and the 2.0-litre TDI. When the Skoda Karoq arrives on our shores in 2018, it could give the Hyundai Tucson a run for its money if launched in the Rs 18-24 lakh price bracket.