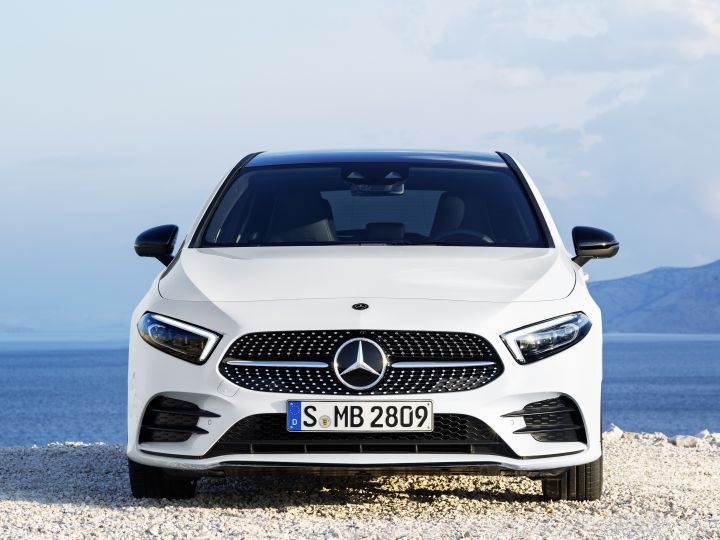 Mercedes-Benz has unveiled the 4th generation A-Class hatchback at an event in Amsterdam, Netherlands. This is an all-new car, with a familiar-looking but all-new exterior design, heavily reworked interior and more interior space. All thanks to increased dimensions, new engines and very importantly, an intelligent voice assistant which makes its debut on this, the most affordable car in Mercedes-Benz’s range.

The A-Class seems to have have grown up as compared to the car it replaces if you look at it; the slimmer headlamps, wider grille and airdam give it a wider stance. Along with the obvious similarities in design to the CLS 4-door coupe, the new A-Class gets a wider front track and is longer too - giving it that grown up look. The detailing on the side is much milder on the new A-Class, the windows are similar in design to the older car and the 30mm increase in wheelbase (and the resultant in length) is noticeable.

At the rear, the taillamps have a Porsche vibe to them, and the A-Class seems to have grown a bigger butt. Twin exhausts peek out from the blacked-out lower half of the rear bumper, completing the set of visible changes on the outside.

Inside, the A-Class is world’s apart from the previous generation car. The centrepiece being the large combined screen in the dashboard which is made of two 7-inch (in the lower trim) or two 10.25-inch screens - one acting as the driver information screen, the other as the infotainment system. The five A/C vents on the dashboard are all-new, and are similar to the ones seen on the all-new G-Class. These can light up along with the optionally available 64-colour ambient lighting system to make the A-Class a mobile party lounge.

The new Mercedes-Benz A-Class becomes the first car in the company’s lineup to get the ‘Linguatronic’ voice assistant. Similar to voice assistants on smartphones, saying ‘Hey, Mercedes!’ can trigger the voice assistant, which can then help you with playing music, finding a parking spot, finding points of interest, suggesting the best routes to those points, among other functions. The Linguatronic system as well as the wide-angle screen are designed to learn from those who use the car, adapting displays and actions based on machine learning for a more personalised feel, says Mercedes.

For now, Mercedes-Benz has announced that the new A-Class will be manufactured in five plants across three continents, but has announced any plans for India. When launched in India,  the A-Class will have no competition as its sole competitor, the BMW 1-Series, has been discontinued for an indefinite period of time. Mercedes-Benz may launch the all-new A-Class here later in 2018 or in 2019. We expect them to reveal some details at the Auto Expo 2018.