New-gen Kia Carnival Revealed: Here’s Everything You Need To Know

The new Carnival looks more like an SUV, gets more features and feels more premium than ever! 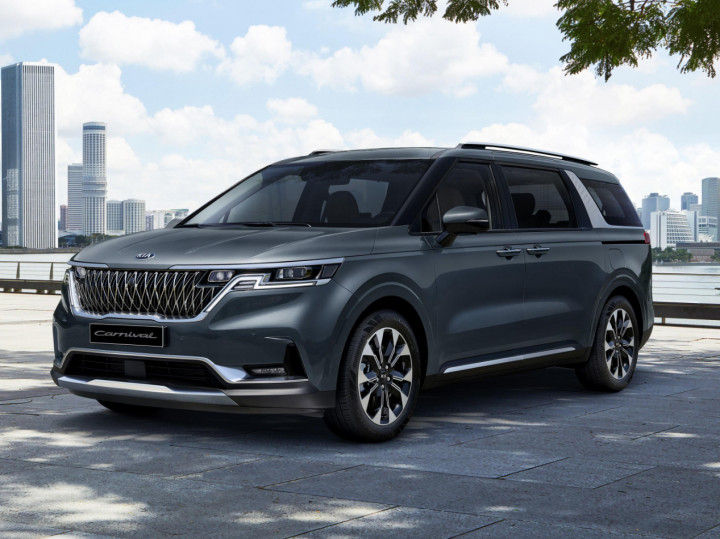 The new generation Kia Carnival has been fully revealed and the manufacturer has spilt various details about the India-bound MPV. You must have already seen its exterior and interior design by now, so let’s start with the engines the new Carnival will be offered with in international markets.

The Carnival will be offered with three engine options: a 294PS/355Nm 3.5-litre V6 direct injection petrol, a 272PS/332Nm 3.5-litre MPi V6 petrol and a 202PS/440Nm 2.2-litre diesel engine. While the current diesel engine is based on a cast iron block, the new one utilises aluminium, helping it shave 20kgs. All three engines will be offered with an 8-speed automatic transmission and there won’t be any manual transmission this time around.

The Carnival looks more like an SUV now and we quite like the all-new design. The upright front-end with the trademark Tiger Nose grille, rectangular headlamps and those snazzy DRLs beg for attention while the flared wheel arches and large dual-tone alloy wheels give it a muscular look. We also like the slim LED tail lamps as well as the blacked-out bumper with a faux skid plate that helps break the visual mass.

It’s also slightly longer and wider than its predecessor. It’s longer by 40mm at 5155mm, wider by 10mm at 1995mm and has a 30mm longer wheelbase at 3090mm. The Carnival will be offered with seven-, eight- and eleven-seater options.

What’s also impressive is the sleek interior design of the Carnival. The cabin could be mistaken for a Mercedes, courtesy the twin screen set up that consists of the infotainment system and digital driver’s display. Look below and you see a bit of Audi thanks to the faux AC vents which across the width of the dashboard. Topping up the design is the round gear knob which takes influence from Jaguars.

In typical Kia fashion, the Carnival comes loaded with features. Noted ones include the latest iteration of UVO connected car technology, electric sliding rear doors, a powered tailgate, climate control, a wireless phone charger and a new ‘Rear Passenger View & Talk’ feature that helps passengers at the front converse with those at the rear through a video feed on the infotainment system.

The Carnival also comes with a host of driver assistance systems such as forward collision avoidance assist, lane keeping assist, blindspot collision avoidance assist, driver attention warning and highway driving assist. It also gets a few updates under the skin such as a revised independent rear suspension and the shift to an electric steering system instead of a hydraulic unit.

The updated Kia Carnival is expected to reach India by 2022 and we expect prices to start around the Rs 26 lakh mark. The Carnival currently locks horns with the higher variants of the Toyota Innova Crysta.