Meet the A-Class with a boot that isn't the CLA. Confused? We don't blame you 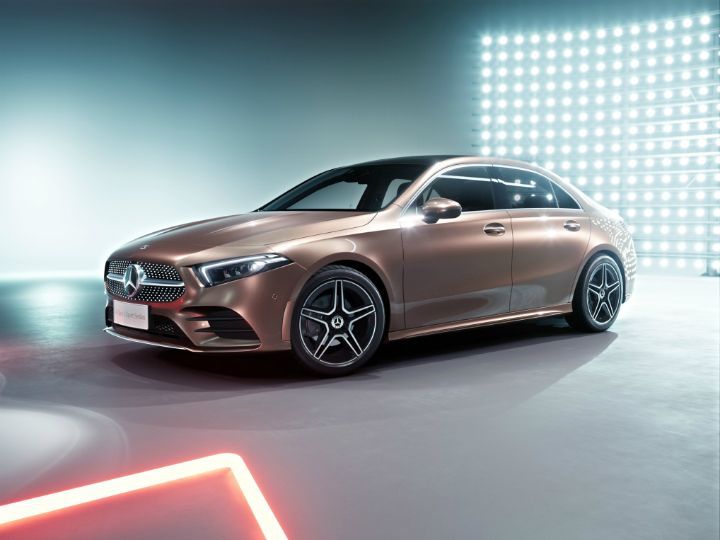 Taking centre stage at Mercedes-Benz' swanky pavilion at Auto China is the sedan avatar of the new A-Class hatchback. And since it's China we're talking about, it isn't a run of the mill sedan - it's the extended wheelbase version.

Simply put, like the A-Class with a big trunk. What did you expect? But, we have to admit, the execution is super clean. The long nose, coupled with the fastback-like roofline and the stubby boot makes for a good looking sedan. For the China-spec "L" version, Mercedes-Benz has stretched the wheelbase by a full 60mm.

There's no mistaking this baby for anything but a Mercedes. The big three-pointed star, the diamond-like detailing on the radiator grille and the LED elements in the lamps give it the family look. The A-Class sedan might be the youngest in the clan, but there's no denying that it’s got the sass it needs to carry a Mercedes badge.

We'd go out on a limb and say the interior of the new A-Class is possibly the best we've seen on an entry-level luxury car. The highlights, of course, are the two gigantic screens on the dash. Much like the flagship S-Class, the two displays look like they're one big screen. Other elements such as the sporty flat-bottom steering, the turbine-like AC vents and the brushed aluminium detailing do their bit in making the cabin feel upmarket.

Mercedes-Benz says that the focus for the A-Class sedan for China was to improve the rear seat experience. And hence, the wheelbase for the China-spec sedan stands at 2789mm (vs 2729mm for the Euro-spec) to improve knee room for rear occupants. Boot space is rated at 420 litres, just like the upcoming Honda Amaze. We know it isn't relevant, but we wanted to throw that in.

It's Got The Power?

Not really. Mercedes-Benz uses fancy words like "conicshape trumpet honing" and "camtronic" to describe the tech in the engine. While we look those up in the dictionary, we can tell you the A-Class Sedan gets two engine options in China. A 1.3-litre petrol that can be had in two states of tune, either 136PS or 163PS, and a 2.0-litre motor that makes 190PS of power. Both engines come paired with a 7-speed dual-clutch transmission.

Should We Care About It?

Yes, we should. Quite a lot, actually. The A-Class hatchback didn't really take off in India, because, well it was a hatchback. The Indian luxury market still looks at sedans with lusty eyes, which probably explains why a coupe-ish CLA didn't click either. Also, the CLA-Class isn't for the seth ji at the least, it's for his spoilt son. Room at the rear is nearly non-existent. The A-Class L, however, seems to address both those problems. It's a proper small sedan that offers a higher level of usability.

Not to forget, Mercedes-Benz did give us the E-Class L a year back considering our market's obsession with rear-seat space. It's too early to say whether it will make its way to India. But, we don't see any reason why Mercedes-Benz India would choose not to.