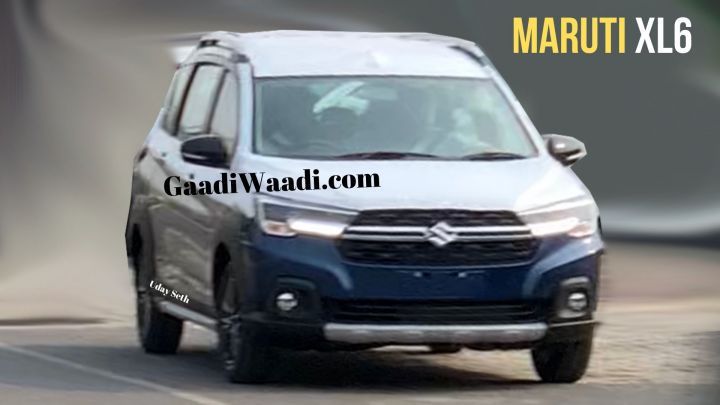 Maruti Suzuki’s latest offering for the Indian market will come in the form of a 6-seater crossover MPV called the XL6. Even though it is based on the Ertiga, the XL6 is expected to be a potential rival to the more premium Mahindra Marazzo. Last month, we spotted the XL6 being tested for the first time, but the changes were not visible as the MPV was heavily covered up. Now, we have more spy shots of the upcoming MPV and here’s what you can expect.

The XL6 badge is clearly visible on the boot along with the NEXA decal on the rear windshield, hinting at this being sold through the company’s premium line of showrooms. Maruti has previously used the XL-7 name with the first-gen Grand Vitara that came with 7-seats and a V6 petrol engine. Going by this and previous reports, we can safely speculate that the XL6 will come with 6-seats. The middle row will feature captain seats in comparison to the Ertiga’s bench.

The XL6 is basically the Ertiga with a number of changes to give it a crossover image. The front end styling is completely revised and the XL6 comes with new, larger headlamps and grille along with a different bumper design. The ride height also seems to have been raised and the MPV gets plastic cladding all around with wider wheel arches and roof rails. The rear bumper also features a different treatment with larger black cladding and a faux diffuser.

Apart from these changes, the XL6 is exactly similar to the Ertiga and gets the same body panels, wheels (now all-black) and tail lamps. The interiors are likely to come with an all-black colour scheme along with the new Smart Play infotainment system and other premium touches.

Currently, the Ertiga is available with a 1.5-litre Smart Hybrid motor which makes 103PS and 138Nm of torque. Maruti Suzuki phased out the 1.3-litre diesel mill from the Ertiga lineup and replaced it with the newer, in-house-developed 1.5-litre DDiS 225 which makes 95PS of power and 225Nm of peak torque. However, with the BS6 norms coming into effect, we expect the XL6 to make do with just the petrol option. The 1.5-litre petrol engine is likely to be offered with a 5-speed manual transmission.

The Ertiga Cross/XL6, as we mentioned before, will slot above the standard Ertiga and rival the more expensive Mahindra Marazzo and Renault Lodgy. It will be launched on August 21 with prices expected to range between Rs 7.45 lakh to Rs 11.21 lakh (ex-showroom Delhi).