Kia Sonet: This Is Where You Can See It If You Missed Auto Expo 2020

Kia has released a new TVC of the upcoming SUV which it is currently showcasing at the Kia BEAT360 studio in Cyberhub, Gurugram 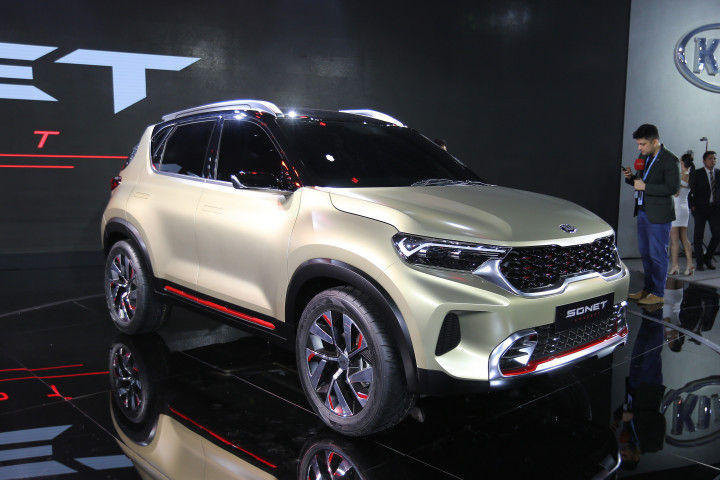 It has only been 5 months since Kia commenced its operations in India with the Seltos. In that short span, it has become the fourth largest carmaker in India with respect to volumes. The Seltos is a runaway hit with sales numbers skyrocketing every month. Kia’s third offering for India will be the Hyundai Venue rivalling Kia Sonet subcompact SUV that we first saw at Auto Expo 2020.

Before its launch later this year, the SUV has made its presence felt again through a flashy new video. Meanwhile Kia is also showcasing the Sonet Concept at its BEAT360 studio in Cyberhub, Gurugram until February 29, 2020.

We absolutely dig this new video of the Sonet Concept which highlights each and every design detail of the SUV. The “tiger nose” grille, the headlamps, the tail lamps that extend to the whole boot lid, C-pillar and the roof rails are some of them. We are already fans of the Sonet and how it looks. This video adds to that, and we hope that the production version turns up like this.

In the meantime, Kia had also revealed some standout features in the Sonet such as a 10.25-inch infotainment and navigation system, UVO Connected car tech, Bose premium audio system, and an intelligent manual transmission (iMT).

We expect the Sonet to come with three BS6 engine options. The petrol will be the same 1.0-litre T-GDI from the Venue while the diesel will be a detuned version of the Seltos’ 1.5-litre CRDI. The petrol engine is likely to produce around 120PS while the diesel is expected to churn out 90PS and 250Nm. Apart from these, there will also be a 1.2-litre naturally aspirated petrol engine. We expect Kia to offer a manual gearbox, a DCT and the above mentioned iMT.

The Sonet, when it debuts in India will have a slew of rivals to compete with. Some established ones are the Tata Nexon, Hyundai Venue, Ford EcoSport, Mahindra XUV300, and the Maruti Suzuki Vitara Brezza. Meanwhile, upcoming rivals include the Volkswagen Taigun, Skoda Vision IN-based SUV, Renault HBC, and Nissan EM2. The wait for the Sonet won’t be that long as Kia will launch the SUV by August 2020.

Here's the video for you: