The day has finally arrived! Ford has just launched the EcoSport facelift in the Indian market. It is offered in a total of 10 different variants, starting from the Ambiente MT petrol which is priced at Rs 7.31 lakh (ex-showroom Delhi) and goes up to Rs 10.99 lakh (ex-showroom Delhi) for the top end Titanium+ AT Petrol. It is offered in 6 different colours. 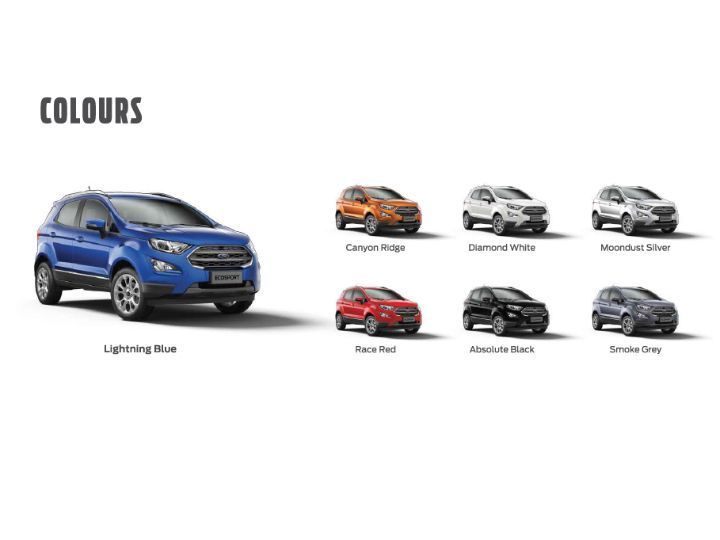 If you've lived under a rock till now, here's a little refresher: the Ford EcoSport is finally getting a facelift after four years. There are minor exterior changes and major interior changes, along with some changes in the engine and transmission departments. If you want to know what it’s like to drive the new engine and transmission combo, you can read our review here.

On the outside, the changes are only limited to the front profile. It now gets a bigger front grille, which is flanked by redesigned LED headlamps and DRLs. Walk around it and the only new thing you'll notice is the new 17-inch alloy wheels. There are no major updates done to the rear either, save for the redesigned bumper.

Inside the cabin, however, things are quite different. The new all-black cabin now gets a floating 8-inch touchscreen unit, which comes with Ford's SYNC 3 Infotainment system. If you opt for a lower variant, you'll have to settle for a 6.5-inch unit. However, both feature Apple CarPlay and Android Auto. The instrument cluster, along with the steering wheel and central console has been completely redesigned, and now feature a similar design layout as the new Ford Focus.

Under the hood, you will NOT find the 1.5-litre 4-cylinder petrol engine. Instead, it has been replaced by a 1.5-litre 3-cylinder petrol engine, which makes 123PS of power at 6500rpm and 150Nm of torque at 4500rpm. The 1.0-litre Ecoboost has also been shelved in favour of the new engine. Transmission duties are now handled by either a 5-speed manual or a 6-speed automatic gearbox.

The 1.5-litre diesel engine remains the same. It produces  100PS of power at 3750rpm and 205Nm of torque at 1750-3250rpm. The transmission is handled by the same 5-speed manual gearbox. Some of its rivals include the Maruti Suzuki Vitara Brezza, Tata Nexon and the Honda WR-V.