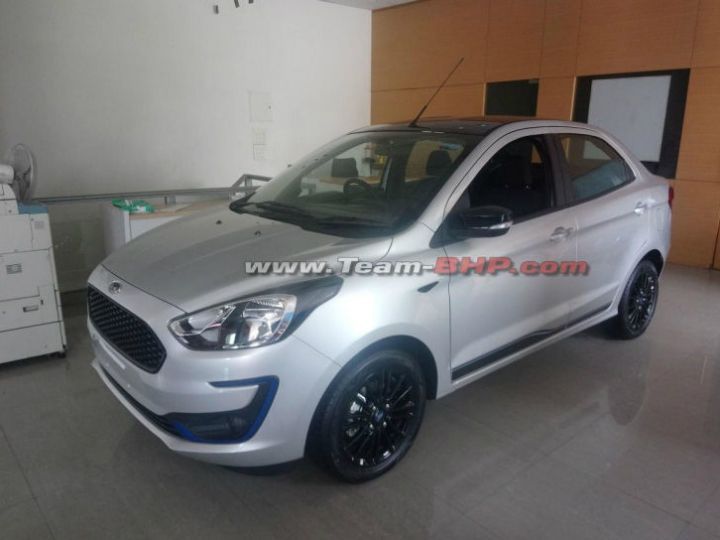 In March 2019, along with the launch of the Figo facelift, Ford introduced a sporty variant of the hatchback called ‘Titanium Blu’. The ‘Blu’, as the name suggests, featured various cosmetic changes to the Figo like blue exterior accents, body decals and black rims to set itself apart from the other variants.

The carmaker is looking to introduce a similar variant in the Aspire range. We’re expecting a launch soon as the Aspire Blu was spotted at a dealership recently. In these images, the sedan features many of the cosmetic treatments that were added on to the Figo Blu. Features such as the all-black dashboard and the blue bezel around the fog lamp housing are similar to the Figo Blu. Bits such as decals, blacked out rims, ORVMs and roof make their way to the Aspire as well.

The new variant is likely to be based on the Titanium. We say this since it misses out on the SYNC3 infotainment system and gets the 7.0-inch touchscreen instead. This also means that the Aspire Blu will also miss out on features such as side and curtain airbags, Apple CarPlay and Android Auto, auto headlamps and wipers. Mechanically, the Aspire Blu remains unchanged. It’s expected to feature the 96PS 1.2-litre petrol, as well as the 100PS 1.5-litre diesel engine. However, it is unlikely that the 1.5-litre petrol-automatic will be offered in the Blu variant.

Currently, the Aspire range starts at Rs 5.81 lakh and tops out at Rs 8.96 lakh (ex-showroom Delhi). Since the Blu is based on the Titanium variant, it’s expected to be priced right between the Titanium and the Titanium+ respectively. That should mean a sticker price of around Rs 7.50 lakh for the petrol, and Rs 8.20 lakh (ex-showroom) for the diesel.