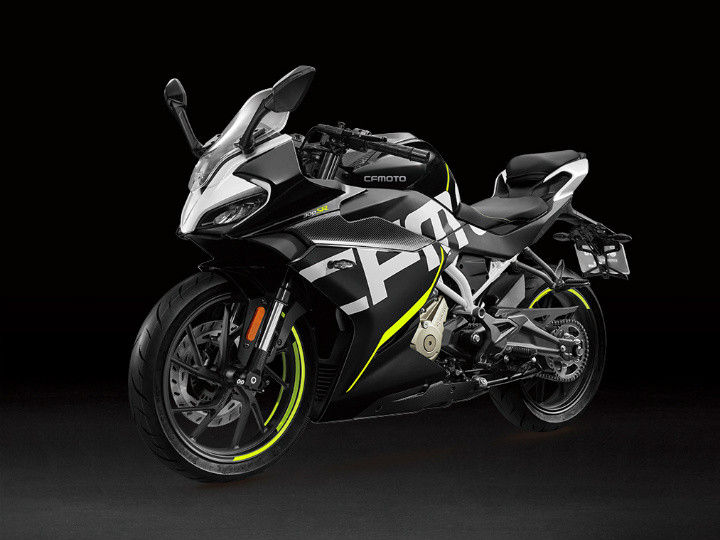 We’ve known for a while that CFMoto was planning to unveil the 300SR (SR stands for Sport Racing). However, this is the first time the Chinese bike maker has officially unveiled the motorcycle for the international market. Yes, CFMoto is expected to bring the new 300SR to India by the second half of this year. Expected to be priced around Rs 2.5 lakh to Rs 2.8 lakh (ex-showroom), it will take the fight right to the TVS Apache RR310, the Kawasaki Ninja 300, and the Benelli 302R.

The CFMoto 300SR is a proper sportbike, there’s no doubt about that. It gets a fully faired body, clip-on handlebars, and a pillion seat high enough for the pillion to see miles ahead of you. Back in May 2019, the bike maker unveiled a 250SR prototype. Apart from a few changes like the race-spec livery and the exhaust system, the rest of the design is pretty much similar between both versions.

Underneath the fully faired body, the 300SR is similar to the 300NK that’s sold in India. So, you get the same 292cc single-cylinder liquid-cooled motor, which makes 29PS at 8750rpm and 25.3Nm at 7250rpm, mated to a six-speed gearbox. In the naked variant, this unit belts out 28PS and 25Nm. Now, the 300SR is still a Euro 4/BS4-compliant motorcycle, so there might be a difference in power and torque figures when the Euro 5/BS6-compliant version goes on sale.

Apart from the engine, the 300SR shares a lot of other parts with its streetfighter sibling. For instance, both are equipped with a USD fork at the front and a monoshock at the rear. However, we think CFMoto might have tweaked the suspension settings for the fully faired variant. Braking hardware consists of disc brakes at both ends and dual-channel ABS is offered as standard. You even get a fully digital TFT display with phone connectivity at your disposal with two display modes.

By the looks of it, the 300SR seems to be a pretty impressive machine. But will it make a big impact on our shores? Only time will tell.