Well, we certainly hope so since it looks bonkers and begs to be thrashed! 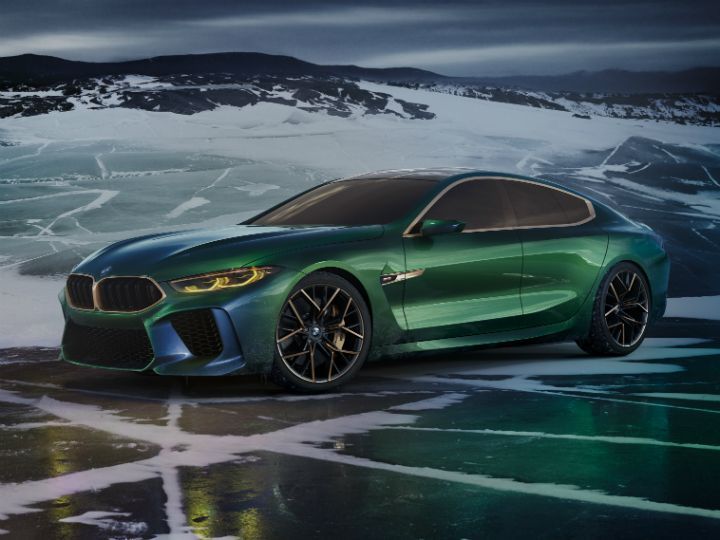 The BMW 8 Series grand tourer, which was unveiled as a concept in May 2017, is set to go into production later this year. However, to whet our appetite, BMW has showcased a swoopy four-door, Gran Coupe version of the sleek two-door GT. If that wasn’t complicated enough, its skunkworks team, the M division, was given a free hand as well. The result of all this effort is the barking mad M8 Gran Coupe, which according to us is one of the best looking GT cars south of an Aston Martin DB11 or Bentley Continental GT.

While the 8 Series will eventually replace the 6 Series as BMW’s flagship GT car, the M8 Gran Coupe will summon the end of the M6 Gran Coupe. The latter will go up against Mercedes’ S-Class Coupe. Although the Merc is a tool best used for crushing continents in a straight line, we expect the BMW to offer more thrills on switchbacks too. The svelte-looking BMW is expected to feature double wishbones at the front and multi-link suspension at the rear with rear-wheel steer. The 8 Series and the 8 Series Gran Coupe will be offered in rear-wheel drive and XDrive AWD configurations as well with BMW’s existing range of engines - a 3.0-litre, in-line six turbo petrol (840i), a 4.4-litre V8 turbo petrol (850i), a hybrid drivetrain (840e) and the top-of-the-line 6.6-litre V12 turbo petrol (860i or M860i). The M8 Gran Coupe featured here, however, is likely to get the same powertrain as the BMW M5 - a 4.4-litre V8 biturbo petrol capable of producing over 600PS, an 8-speed auto with paddle shift and switchable M xDrive as well.

Like most concepts from the Bavarians, the BMW Concept M8 Gran Coupe looks like it could hit the production line any minute. “The BMW Concept M8 Gran Coupe is designed to stir things up, to polarize -- it should move you emotionally,” said Domagoj Dukec, vice president, Design BMW M and BMW i. He further added, “With this car we want to reach people who are looking for something special and who want to stand out from the crowd. Here, BMW M is unmistakably taking luxury out of its comfort zone.”

As for specific details, BMW says the production-spec 8 Series’ face is evident in the new concept’s design. The kidney grilles are now broader, joined by an unbroken grille surround and placed lower to emphasise its low centre of gravity. To enhance this look, the LED headlamps with hexagonal lighting elements, borrowed from BMW’s GTE endurance racer, have been positioned slightly higher than the grille too. Completing the aggressive looks of the Gran Coupe are the wide air intakes finished in carbon-fibre-reinforced plastic (CFRP).

Yes, the production version will lose some of the standout elements like the mean-looking headlights and the rifled exhaust finishers. And we expect it to be slightly raised as well. However, there is no denying that it will still look sexy when it finally rolls off the line in 2019. Meanwhile, if BMW was to take our opinion on what the final production version should look like, it would be to try and retain that gorgeous duck-tail boot spoiler across the range, please.