Meet The Newest Kid On The Sub-4m Block, Kia Sonet 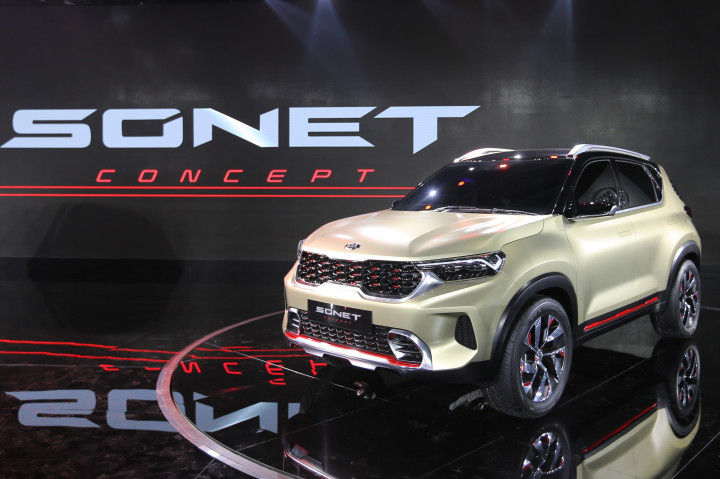 The Kia Sonet is finally out of the bag! The Brezza-rivalling sub-compact SUV has been revealed in India in its concept iteration. First impressions? It looks like a scaled-down version of the Kia Seltos, but there is certainly more to it than meets the eye.

The Sonet gets revamped styling to differentiate it from the Venue. The front-end comes with Kia’s trademark tigernose grille, which is now sharper and sleeker. These are flanked by headlamps which come with snazzy DRLs. In profile, the Sonet’s upright stance and squared-out wheel arches make it look like a typical SUV! Further, there’s a shoulder line which connectes both the arches. At the rear, the SUV comes with connected tail lamps.

Under the hood, the production model could come with two powertrain options: 1.0-litre T-GDI from the Venue and a 1.5-litre CRDI from the Seltos. The former develops 125PS mated to a 6-speed manual/7-speed DCT. The oil burner could develop 90PS and 250Nm of torque paired with a 6-speed manual gearbox. It also gets a 1.2-litre naturally aspirated petrol engine married to a 5-speed manual. All these engines will obviously be BS6-compliant at the time of launch.

Kia has announced that it will launch the sub-compact SUV by the second half of 2020. We expect the prices to hover around Rs 6.5 lakh to Rs 11.20 lakh. Offerings in this space include the Tata Nexon, Hyundai Venue, Ford EcoSport, Mahindra XUV300, and the Maruti Suzuki Vitara Brezza. Meanwhile, upcoming contenders include the Volkswagen Taigun and Skoda Vision IN-based SUV.